Advice for the Virginia Beach/Chesapeake area?

We are heading towards this area to help our daughter move from Augusta GA to Chesapeake VA. Her husband is in the Navy and is being assigned to the Little Creek base, but he's been sent for advanced training so he can't help with the move.

Any suggestions on restaurants, regional food specialties, fun things to do (other than packing and unpacking a moving van which is a whole lotta fun!). I've located all the dog parks and hiking trails in the area, but if any of you know the area well, advice is appreciated.

I live in Williamsburg, VA these days. It is a nice area.

I am a fan of Old City BBQ in Williamsburg - their smoked brisket is quite good.

In the Virginia Beach area, we have had good seafood there, but the names of the places were not "sticky."

I know the area very well... at least I did. I worked for nearly a decade at the local newspaper, The Virginian-Pilot. I was downsized at the beginning of 2012, so some of what I tell you may be outdated.

Chesapeake has a couple of decent malls, Greenbrier and Chesapeake Square. Chesapeake itself doesn’t really have a downtown per se... it’s more like a suburb of Norfolk. Downtown Norfolk also has a very nice mall downtown, the MacArthur Center, along with some great dining and nightlife options. If I remember correctly, Granby street is the heart of downtown shopping.

The MacArthur Memorial is in Norfolk, as is the USS Wisconsin and an adjoining maritime museum. The Chrysler Museum of Art is very nice. Ghent is their kind of bohemian neighborhood with some really nice restaurants there too.

Across the water from Norfolk (there’s a ferry) is Portsmouth. Portsmouth was always a little rough around the edges, but was making great strides in rejuvenation. I’d be interested to know how that turned out. Portsmouth has a children’s museum and a couple more museums.

Virginia Beach of course has the oceanfront and a number of nice restaurants on the waterfront. But it’s lacking in tourist things like amusement parks you’ll find in other major beach destinations.

Lots of great festivals in the late summer in fall, like the Pungo Strawberry Festival in the outskirts of Va Beach. The Suffolk Peanut Fest. You get the point.

Busch Gardens and Colonial Williamsburg is less than an hour away from much of Chesapeake. DC is about three hours due north, so great for a weekend getaway. Charlottesville and Monticello are a couple of hours away. The Outer Banks of NC a couple of hours. The Wright Brothers Memorial... Roanoke Island (Lost Colony outdoor drama). Lighthouses.

The Eastern Shore is right across the Chesapeake Bay Bridge Tunnel from Va Beach. THAT is a nice quick getaway from the hustle and bustle, quite a few nice B&Bs and eateries. Antiquing.

Hampton has the Air and Space Museum, and if you’ve seen the movie Hidden Figures, Hampton is where all that happened.

Norfolk has a zoo, and Va Beach a nice aquarium. I did the annual Discover Hampton Roads magazine for the pilot for several years. Let me know if you have any follow-up questions. 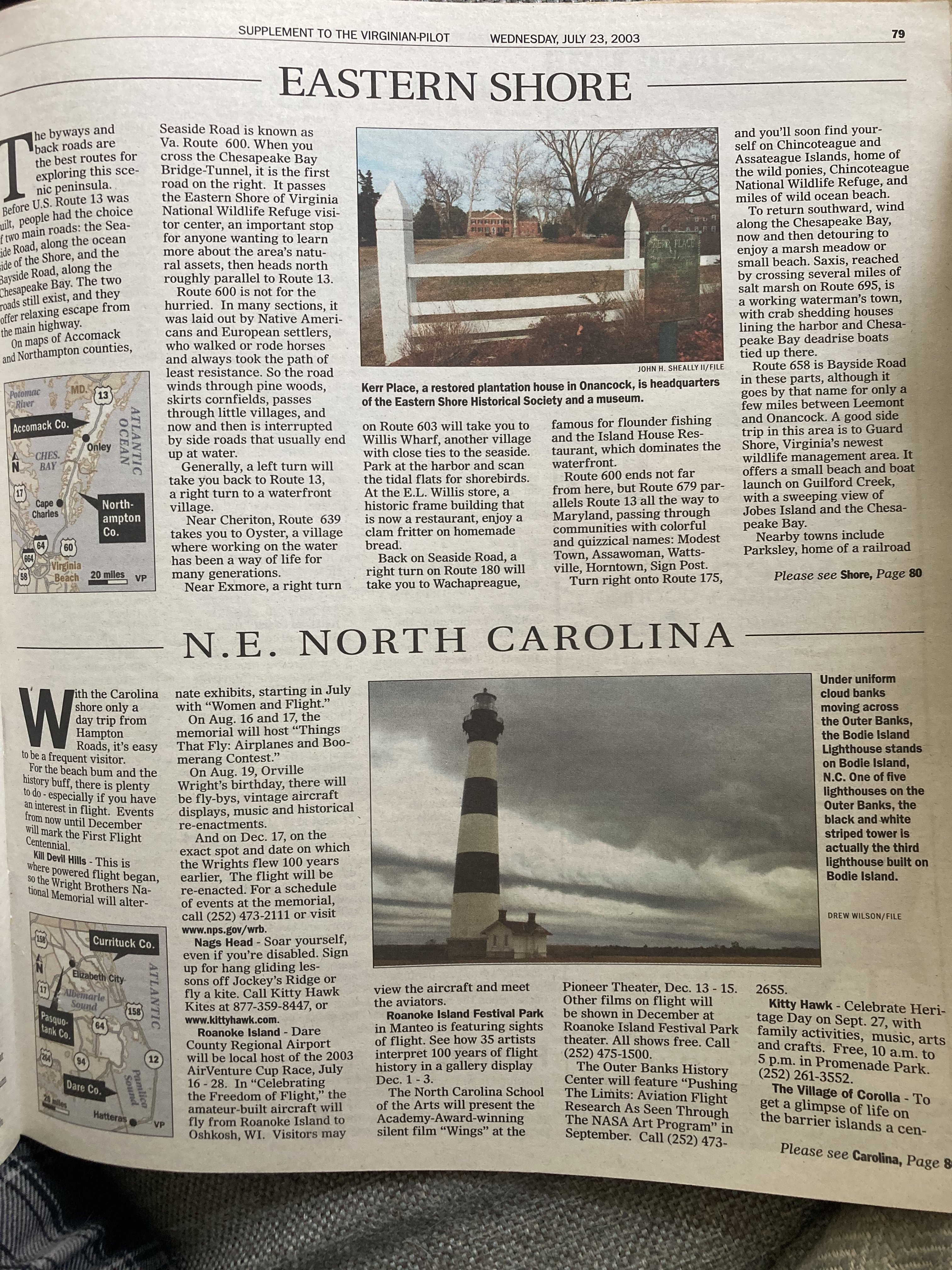 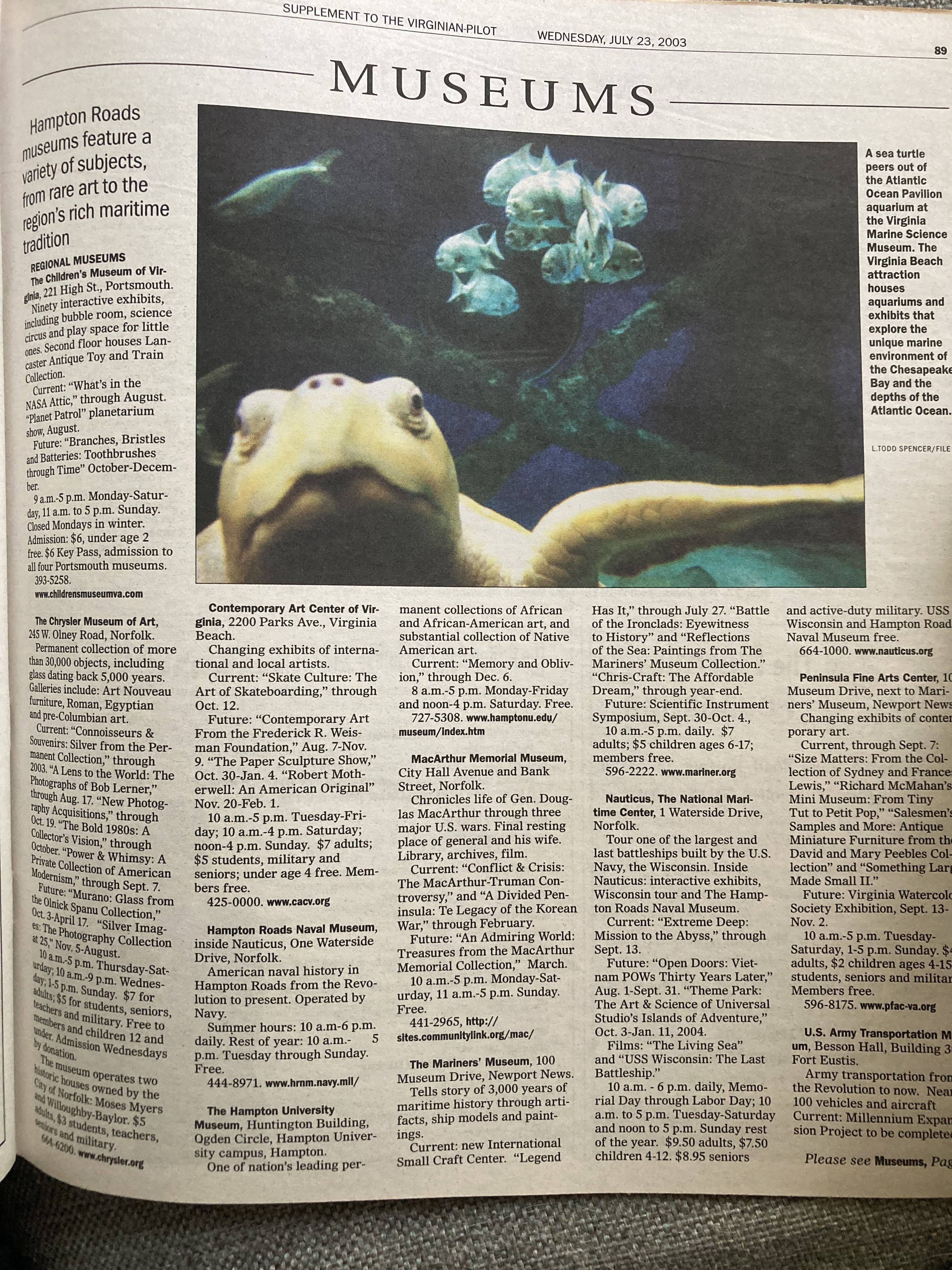 Those two pages are very outdated, so disregard any specific special events and whatnot. Sorry. Pilotonline.com still seems to be a pretty good source of information... but the website itself has always been awful and still is.
Last edited: Aug 4, 2021

I’ve been adding to the initial reply, so there may be stuff you didn’t see initially. Sorry.

It’s pretty easy to get around the various areas once you get the hang of it. I learned before the ubiquitous GPS era though. Buy one of those spiral bound South Hampton Roads maps, so you can really learn how everything is connected.

Rush hours can be rough, because there’s only so many water crossing points, an hundreds of thousands of people trying to get somewhere. If you’re arriving from the west on I-64, you’ll notice that suddenly you’re in heavy traffic right around Williamsburg, or maybe even as soon as you leave the Richmond area.

I lived in the Churchland/Western Branch area, and a 15 minute drive (in light traffic) to downtown Norfolk usually took at least 45 minutes during the morning and evening commute times. Sometimes it’s better to travel on the highways getting from Chesapeake to Va Beach.

I suspect the son-in-law’s military buddies will be a huge huge help getting to know the area.

It’s kind of a schizophrenic area. PETA is headquartered in Norfolk, but Pat Robertson is also there.

Since I left, Old Dominion university has not only started a football program, but jumped almost immediately to 1A, and compete in C-USA. The area is also a major hotbed of high school talent. I missed out getting to see Percy Harvin in football action, but I did get to see Justin Upton’s last high school baseball game. He went 0-for-4.

The Norfolk Tides minor league baseball team have a great park right on the water. So that’s fun, even if you’re not a huge sports fan.

It’s a very history-rich area. There was a revolutionary war battle in the Great Bridge area of Chesapeake. Benedict Arnold was in Portsmouth for a time. There’s a cannon ball lodged in the exterior of an old church right beside the MacArthur Center mall. The ball was fired from a British ship. The Attucks Theatre in Norfolk was the “Apollo of the South” ... part of the legendary Chitlun Circuit. All of the great African-American performers played there, from Duke Ellington and Nat King Cole to Redd Foxx.

There’s lots of great venues like that. Norfolk has an opera, orchestra and ballet. Musical theater. Shakespeare.
Last edited: Aug 5, 2021

One last thing: crab cakes. I can’t give you a specific restaurant to check out. It’s just been too long. But living there made me a crab cake snob. I haven’t had a good one since I left.

I’m not guaranteeing you that every place you go will have world class crab cakes. But if you happen upon a nice place, you’ll likely have never tasted better.