Another poll concerning a possible change.

We also learned, from the same kindly gentleman, that it's possible to remove the list of pipes and tobaccos that appears under your avatar. 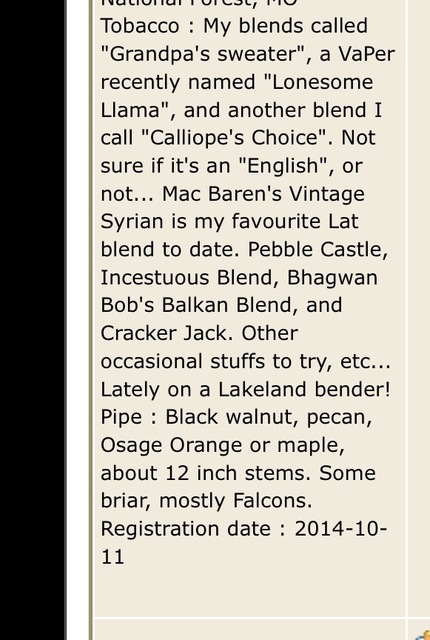 These list would still appear in your profile (where they belong) and would no longer create the gaps like this in the forum.

This would free up members to create as long a list as desired without disrupting the forum itself.

My personal opinion is that the list is important for secret santa, random bombs, the bomb squad, etc but many member (myself included) leave it blank so as to not leave large gaps of unused space and annoy folk. Lol.
Allowing it in the profile is awesome, under the avatar not so much.

Thanks to Ozark for forgiving me for using his profile..(I didn't ask, but I promise you aren't being singled out or picked on. You were the first one with a decent enough list to show what I was referring to)

Yes, move to the profile.

By all means, move to profile!

Happy to see it all moved to profile.

Thanks for proposing this, pb.  :cheers:

As you may have noticed we did discontinue the informational areas under your avatar, it is still visible by clicking on someone's profile.
After 9 years and almost 12,000 post I finally filled that area of my profile in. Thank you for weighing in on this matter.

If you voted the wrong way and have a worth while appeal reversing the change is a simple click of the mouse, so don't be afraid to pm Carlos, Mark, or if you are desperate me.

All your info will still remain in one's profile and it does take up less space next to the board. Again, if a member cares to see what another members choices of tobacco's are or pipes, just tap that members Avitar and BINGO, you will see all.