So, I get a notice that there are new replies to the Cos' thread, and then this...


BoB":2rn42fog said:
Sorry, but only users granted special access can read topics in this forum.
Click to expand...

It's the new normal.

I haven't read it actually. Probably got too political. It can be found in the Rubber Room.

Just to clarify, my exasperation is not intended as a comment on or criticism of BoB's editorial or administrative policies. I take no issue with those. This isn't my house.

It's prolly just as well. If it went political, I'm out anyway. But there's plenty more to say on that subject without dragging the discussion into the political sewer.

Two Soviet citizens are walking together. One of them clears his throat and spits it on the street. The other one says, "Careful, Comrade -- you know how dangerous it is to discuss politics !"

Citizens of Yaksylvania can take any two pieces of data and assign causality. Then they point a lot.

I was just letting you know where it went. As I recall, you are not a member of the Rubber Room, right? It's not all disgusting political commentary down there you know. :sunny:
A

Carlos":sl0v4h4k said:
I was just letting you know where it went.  As I recall, you are not a member of the Rubber Room, right?  It's not all disgusting political commentary down there you know.  :sunny:
Click to expand...

You're right, Carlos...I'm not a member. And although I assumed it's not all disgusting political commentary, I have gathered that it includes interactions that are abusive, or acrimonious, or unpleasantly disputatious...or at least sufficiently uncivil that the collective proprietorship of BoB agrees that best not left lying around where it can be seen by the rest of the membership. I mean, I assume that "Enter at your own risk" is there for a reason.

Oh, what the hell...assumptions suck. There's no substitute for direct observation. I might as well find out for myself. Besides, sometimes an alien interview or two is just the thing to amuse my mutant mind. Join request sent. :mrgreen:

It began as a Cos' lovefest . . . then some idiot said Cos' shows and albums were better than his commencement addresses . . . this naturally morphed into a discussion of whether civilization owed more to cowboys or commies . . .  and then the thread went missing.

Well, as a past mod myself I can say with some certainty that a good mod gets a sixth sense about when the cow patties are about to get flying lessons.

Nothing to see here, folks. Just move along.

KevinM":kh279be9 said:
...a good mod gets a sixth sense about when the cow patties are about to get flying lessons.
Click to expand...

:lol:  Heh...brilliant! That's the kind of metaphor I appreciate.

It also demonstrates why I've not been interested in following the discussions into the Elastic Chamber, where (reportedly, at least) the emotional weather forecast generally calls for a shitstorm. It's not so much that my perception is that everything there is poopular in nature. Rather, it's more a matter of not wanting to have to roll up the pant legs and constantly be on the lookout for fecal land mines...and airborne cow pies. :mrgreen:

Civility ain't such a hard thing to do. I've never been of the opinion that it automatically equals "dishonesty", or "repression". That's a blind thrown up by emotional infants who are not only happy to hold others in contempt, but also demand that they have a "right" to let everyone know it. It is not civilized behavior.

On that basis, I commend BoB's policy of porting such tantrums to The Asylum. Such crapfests are not fit company for folks who've managed to progress beyond their own emotional prepubescence.

All hail mutant minds. Wherever they end up.

Kyle Weiss":v76dxezw said:
All hail mutant minds.  Wherever they end up.

That proves that you have a mutant mind, Kyle. Only mutants would hail other mutants. The "normal" reaction to mutants is considerably less laudatory. :roll:

In case you want to use it as an avatar... 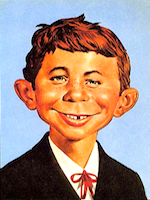 Sorry, but only users granted special access can read topics
2