Are we training ourselves to be attention deficit?

Not the medical ADD but the bad habit of having difficulty focusing/concentrating. I think so and apparently so do others.

Some possible causes; multitasking, social media, mainstream TV and radio news shows, TV reality shows, and other activities that bounce around from topic to topic for long periods.

Some possible antidotes.; reading challenging books, meditating, smoking a pipe with no purpose other than thinking and relaxing, other things that require relatively long periods of staying focused.

I think it's an interesting subject. What do you think?

Not an issue. Not a problem.

Are we? No. Are they? Yes. Too many people want to discount psychology studies and their power and influence. It's our obsession with the individual that clouds this. We're supposed to be able to overcome all obstacles, including entire teams of psychologists and marketers who are studying our every move. What are we clicking. How long we're staying on that click. Color studies. Motion studies. Page design. Algorithms designed to set hormones and brain chemicals in motion in a particular direction. If it didn't work, they wouldn't be doing it. There wouldn't be entire wings of companies dedicated to it. They do it because it works. Social media set the field, and because they've been so successful with it, other sectors of our economy have adopted that philosophy and approach. TV networks and the creative process. It's everywhere. Honestly, I don't think the individual has a chance against that current. And children? Not a chance of a chance of a chance. They have to rewire adult brains, but with children, their brains are wired in that direction from the moment they first see a screen. The generations that straddle the analog and digital world have a memory of concentrating on a sole task, but even they/we are little match for this expertise. Before I forget, it certainly doesn't help (but helps these algorithms) that we completely discount and de-value leisure and relaxation in our culture. We're supposed to be productive every moment of every day. The person who can relax and enjoy life at their leisure is labeled lazy or lacking ambition.

I find it all less interesting than sad.
D

I like The Book Shelf > What are you reading? thread. There's more participation there than I initially would have expected but given the age of the members here I shouldn't have been surprised.

I often think back to the many times I've hiked/backpacked, hunted, fished, foraged, etc. and let my mind concentrate on some topic(s). Was I bored? Not at all!

Youtube and this website are as close to social media as I get. I rarely check my email. I only check my smart phone if it rings or makes a ding notifying me of a text message. I find myself watching less and less television partly because of the shows that bounce around from topic to topic but mainly because of the enormous percentage of time spent on commercial after commercial after commercial. When it comes to TV I think PBS rules. For radio the Classical station is where I hang out. Very little in the way of interruptions.

Yes! My phone is an excellent ADD trainer. Clicks hold my attention for 10/15 seconds max spending a minute on something is like reading a novel.

Totally agree. While most here it’s probably not an issue, but kids 35 and under? Forget it. Unless they had astute parents the damage is done. My wife’s younger brother is 28. He literally, and when I say literally I mean it, cannot go 5 minutes without looking at his phone. His parents did not limit his exposure to technology or video games whatsoever, and you can tell. He even HAD to look during Thanksgiving dinner last year. Incredible no one said anything.
But for many I agree it’s a problem .
K

Amen to all of the above! It's amazing how a little gadget the size of a pack of cigarettes has totally changed our society!

One of tbe reasons I got frustrated when the wifes sister and niece visited. On their phones constantly. Got sick of the niece looking at tic toc all day when she could have been out enjoying all the nature that surrounds us. 5 lakes within 4 miles.

In the evenings I've begun putting on a set of 3M hearing protector headphones with a built in AM/FM radio. I set it to the classical station due to very little talking or interruptions and put the volume very low. Then I grab the current book I'm reading and sit in my recliner for the few minutes I have in the evening for relaxation. The wife sits next to me in her easy chair watching whatever she wants on the TV. Now all is right with the universe. 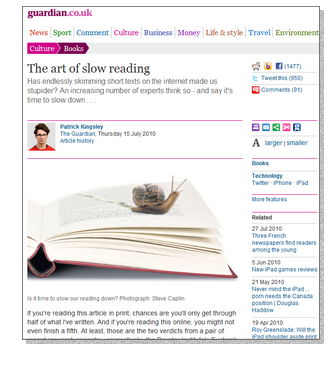 The Art of Slow Reading, from The Guardian - The Neglected Books Page

Patrick Kingsley, “The art of slow reading,” The Guardian, Thursday, 15 July 2010 I missed my weekly late Friday afternoon ritual of scanning through Arts and Letters Daily and printing off 6-8 of its featured ... Read more

Ranger107 said:
One of tbe reasons I got frustrated when the wifes sister and niece visited. On their phones constantly. Got sick of the niece looking at tic toc all day when she could have been out enjoying all the nature that surrounds us. 5 lakes within 4 miles.
Click to expand...

Watch a baseball game or any major crowd event on tv and when they pan the camera up into the stands notice the percentage of “fans” that are glued into their phone screen instead of the game. I call ‘em Internet Zombies.

Going to music concerts is unbearable now. Having to look through a sea of lit little screens recording. I tried one row up off the floor, thinking my line of sight would be just above all the people on the floor holding up their phones, but all those lit screens in my peripheral vision was just as distracting a having to dance my eyesight directly through them. And I don't like being in the front rows because the sound is usually awful. It's bad enough to look to either side of you, seeing all these people who paid a lot of money checking their messages or texting "THE CONCERT IS GREAT!" while they aren't watching it, but all the phones in the air just ruins it for me. I guess I could limit myself to daytime concerts, but I'm still not 8ft tall so I don't have to look through hundreds of little black rectangles held in the air. I can't imagine paying $100+ to be entertained, only to be a slave to either holding up my phone and constantly checking if I have a good angle or checking messages all the time. And I thought the people who were constantly running for food and beers were annoying, back before phones. I'd give a finger, maybe two, to have them be the irritation and not the phones.

I fully respect, and support, the artists who dictate that people check their phones at the front door. Some jerks are going to still sneak them into the venue, but a couple vs every other person holding up their phone is obviously better.