It's always puzzled me why Esoterica tobacco has been the holy grail of many pipe smokers. As such, I gave several 8 oz, bags of Penzance to my daughter to sell. I gave away my last bags of Penzance and Stonehaven. During the course of the day, I went to the remaining jars of St. Ives, Hastings, Pembroke, Margate, and And So To Bed. I smoked a bowl of each. To be quite honest, I hadn't opened the jars in at least a decade. Perhaps, time took a toll. I bought them all during one buying frenzy. As I smoked today, I really didn't care for any of them. Frankly, I was disappointed. I wanted to think that perhaps years ago my taste was different and now I'd think otherwise and be thrilled to be smoking them. Nope. Didn't care for 'em then and not now.

Kind sir, in order to rid you of such nuisance/s occupying space in your pipe tobacco cellar; I will humbly volunteer to take any Penzance, Stonehaven, Margate, and/or And So To Bed you may wish to relinquish!!

I will recompense any packing/postage costs as needed!!!
Any kidding aside, yes, our taste buds change over the years. I went for decades not smoking Burley nor most Ginnyweeds. Then later in life rediscovered these two. I'm still a Lathead, just not so exclusively as before! Heck, I even enjoy a limited selection of aromatics every now and then!! FWIW...FTRPLT

I haven't had an Esoterica blend yet that stands out over other manufacturer's blends, however I have not tried the "holy grail" that is Penzance. The Eso tobaccos I've had have been very nice but I'd say there are blends just as good and far more available out there.

For instance the Seatlle pipe club blends are all stellar and so is Arango Balkan Supreme. The Mac Baren HH line is also very delicious. McClelland shat all over Esoterica as far as I'm concerned.

Amen Brothers. I tried all of the flavors except Scarborough and found them pleasant but unremarkable. Plenty of DIY blends I like a lot better!

ftrplt said:
Kind sir, in order to rid you of such nuisance/s occupying space in your pipe tobacco cellar; I will humbly volunteer to take any Penzance, Stonehaven, Margate, and/or And So To Bed you may wish to relinquish!!
Click to expand...

The Penzance and Stonehaven are gone, but if you'll message me your mailing address, I'll send you the remaining St. Ives, Hastings, Pembroke, Margate, and And So To Bed. I'll send it out next week. I'm not splitting it up. One package with all that remains.
Just let me know in this thread to watch for a message from you.
Last edited: Dec 31, 2020

Well then, there’s a Happy New Year in the making. Good on ye...both.

RSteve said:
The Penzance and Stonehaven are gone, but if you'll message me your mailing address, I'll send you the remaining St. Ives, Hastings, Pembroke, Margate, and And So To Bed. I'll send it out next week. I'm not splitting it up. One package with all that remains.
Just let me know in this thread to watch for a message from you.
Click to expand...

Presuming I did it correctly, a PM is on its way to you!!!! FTRPLT

A miracle I did it correctly!!!! FTRPLT
S

I tried to send you a PM on the new software, but after 15 minutes of NOT being able to, got too frustrated and resigned myself to bed! OH well, them's the breaks, as the wise guru said. A tip of the hat to you, sir, for your generosity at any rate.

RSteve said:
...St. Ives, Hastings, Pembroke, Margate, and And So To Bed.
Click to expand...

It had been many years since I'd opened some of the snap-lock canisters. I really was stunned at the aromas. Even those described as English blends obviously have a significant top note flavoring.

I'm smoking Margate now. Penzance was me favorite blend in the early 2000's. I still have half a pound or so cellared.

SteveMKentucky said:
Penzance was me favorite blend in the early 2000's. I still have half a pound or so cellared.
Click to expand...

Are you able to ascertain the components?
At Tobacco Reviews it's described as Latakia, Oriental/Turkish, Virginia.
One reviewer posted: "Penzance is not cased in any way, just pure tobacco with an all tobacco taste and is more of an Oriental/Turkish blend."
However, every tobacco blender will affirm that all tobacco is cased.
I agree 100% with JimInks analysis, that Penzance contains some black Virginia cavendish.
I am intrigued by all the Esoterica casings and top flavorings.
Last edited: Jan 12, 2021

I really have no idea. Clearly Latakia and Oriental of some sort but other than that I don't know. To my knowledge nobody has made a duplicate so I expect that some of the components are no longer available, like many other old blends.
L

Saying all tobacco's are cased is an overstatement. I'm no expert but my understanding is that latakia and orientals are generally not cased. Neither is perique nor dark fired. Burley, cavendish, and VA are the prime suspects for casing but even there you'll find some exceptions. Union Square is famous for having no casing.

At another site Ernie Q at Watch City Cigar and Pipe writes:
"I can not stress this enough. Every tobacco you buy commercially, unless it is in leaf form, has been cased. Every single one has been cased. McClelland’s red Virginia was cased. Sutliff’s and other’s blending tobaccos are cased. All of them are cased. Pressing, aging and heating can mellow tobacco, but casing is necessary to bring out the complexity In a given tobacco and direct it toward a certain flavor profile. I’m not talking about top notes or aromatic sauces used to give a tobacco a specific aroma and taste. This is about acidic compounds that tobacconists use to lower the ph of the tobacco to reduce tongue bite; to underscore the good natural flavors of a type of tobacco; as an antibacterial to prevent mold and as a humectant to keep the tobacco fresh."

I find this quite interesting regarding casing, Jeremy Reeves, the prominent blender of Cornell and Diehl, in an early video discusses casing and top flavorings. He somewhat implies that some tobacco may be uncased and gives an example. However, in a recent blog at the Smoking Pipes.com website, he seems to echo what Ernie Q has stated several times, that all tobacco sold commercially has been cased, unless it's whole leaf.
Both blenders are quite clear to distinguish casing from adding top flavorants.

In another venue, Ernie Q comments, rather humorously, "If you smoke raw leaf, uncased tobacco, and like it, either you are fooling yourself or have the taste buds of a dumpster rat."

I think almost all tobacco goes through some processing, no matter what the final commercial product may be. It's not just picking and drying. There's something to be learned in the definition of pilón.

"Pilón is the term for a large pile of tobacco, arranged for fermentation. Pilónes can be enormous, weighing 3,500 or even 4,000 pounds or more. After curing in a curing barn, tobacco is brought into a warehouse and assembled in bunches of leaves called hands, and made into a pilón. The leaves sit flat in a pilón, one on top of the other, with boards, cardboard or old tobacco stems beneath. The weight of the tobacco, the moisture in the leaf, and casings that are added by processors creates heat, which causes fermentation to begin, changing the chemical structure of the tobacco, removing impurities such as ammonia and rendering the tobacco smokable."

Now, to clarify, the discussion/definition in quotes was from a cigar website, but I think it may pertain to virtually all tobacco processing.

My understanding, after a fair amount if research a few years ago, is that...YES...all tobacco is “cased”. The term “cased” might be in the way here as it often refers in our thoughts to flavorings added to aromatics. But every leaf of tobacco processed in the western world is treated with some kind of juice to turn it from an odious nasty substance to one that is even smokable. The skills employed in modern treating and processing are paramount in creating the multi-faceted blends we enjoy today. And a significant amount of processing occurs well before the leaf every gets to the final blender...like Gawith or MacBaren or Cornell & Diehl...etc.

Now, there is a tobacco fairly popular for a while...TAMBOLAKA...from Indonesia that is a kind of cottage industry thing...cured supposedly in the rafters of workers huts...or something. It’s related to Burley as I recall. It takes 5 years to cure and ends up being a very potent tobacco in about every way. My point here is that I think Tambolaka might be unique in terms of how it’s processed and what is used. Certainly not the same as Western processing. Having consumed a modest amount of the eye opening stuff I can easily characterize the smoking experience as...moderately grotesque. So embrace the casings used in processing...they are indeed our friends. 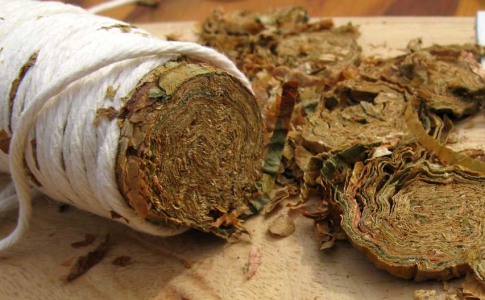 In tobacco lore Tambolaka is, indeed, age cured in the rafters of growers' huts for 5 or more years. It is a version of burley with a very high nicotine content. As did Blackhorse, I also purchased a few "sticks" when, for a while Tambolaka became somewhat popular as a novelty tobacco, somewhat like Andullo recently. When I opened the ziplock containing the Tambolaka, I could hardly believe the odor. To say it stunk would be an understatement. But, I was courageous and rubbed out a bit to smoke. It wasn't bad, much to my surprise. But it wasn't a tobacco for which I'd want a second helping. The most off-putting characteristic of Tambolaka for me was the inordinately high nicotine content and if hydrated a bit beyond how I received it, excessive tongue burn. The sticks of tobacco are very dry and if you rub too much, you get a lot of powder.
Kudos to Blackhorse for reminding me of that scorching tongue experience.
Share:
Facebook Twitter Reddit Pinterest Tumblr WhatsApp Email Share Link