From Out of the West

Kyle Weiss, the notorious epicure and bon vivant of Reno, for some reason known only to him, decided to drop a package on me a few weeks ago. Lacking my address, he was forced to ask me for it, saying he had a pipe that I might like. I humored the lad, and deigned to allow him the privilege. I didn't expect much, thinking the overture was a ruse to sell me Amway products, perhaps, or to ply me with Jehovah's Witness religious tracts.

In due course the package arrived, and you can imagine my surprise upon opening it that it contained an actual briar pipe, an estate all slicked up and restored professionally by the sender, with its own little blue bag. A billiard with tapered bit, my favorite shape. Really decent grain, definitely a flame, almost a straight grain. "Dat debbil Kyle—he done know whats ah likes," I said to myself, for some reason lapsing into some kind of ersatz rural southern dialect. Included was a tin of G. L. Pease's Laurel Heights, a tobacco I had never tried, though the maker's name seemed familiar. I thought that a nice touch.

As I fondled the pipe under lamplight, I espied a modest stamp on the underside: Hand Made. Then beneath: Jones. Seriously, I was stunned. I have been wanting one of Jesse Jones's billiards since he made one for Yak, an erstwhile troublemaker on these pages. This looks like a near duplicate, if not the same friggin' one. As I said, I was stunned and just let the pipe lie as pictured for two days so I could admire it, the pipe being quite admirable. Fit and finish are awesome, the draw is open and perfect, and special mention should go to the stem, which has to be the most comfortable and best fitted in my experience. I have a Castello and an Il Ceppo with this type stem that come close, but Jesse's is more refined and just plain better. I think it's also the only concentric stem I have—in other words, you can turn it 180 degrees and it still fits the shank perfectly. Nor is there daylight 'twixt stem and shank. Is it my best pipe? I hesitate to say so aloud for fear of some old Dunhill warhorses on the rack getting jealous. Let's just say it's in my top five and leave it at that.

But that's neither here nor there. The pipe smokes great, and the tobacco Kyle sent is the best straight Virginia blend, if that's what it is, I can recall ever smoking. Kyle said the pipe "was used to" this blend, so I will continue the practice for a while at least. I'm smoking it right now, and I'm liking it just fine.

So Kyle, if you're reading this, thank you for such a thoughtful and generous gift. Or, if it wasn't a gift, send me the bill—I intend to keep the pipe, at least until I kick.

(And now, a pic of laughable quality. Sorry, folks, but I don't get along with cameras.) 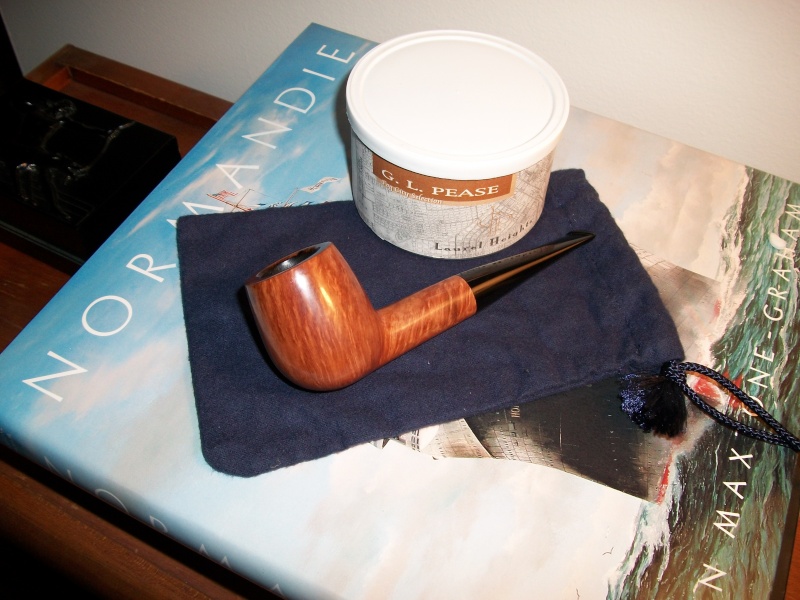 TAHT'S a CLASSIC !! It almost is the definition of a Billiard!! And Kyle is a very discerning person to have picked you for it !! You be one fortunate dude !! Enjoy it in good smoke !! :twisted: :twisted:

I agree, Michael. The lad is scary clairvoyant or something.

I have no clue what any of you are talking about.

(...money is no good here in the desert, anyway--for obvious reasons...)

wow, that is gorgeous. A true testament to the pipe makers craft.

That is a beauty for sure Richard, enjoy that bad boy in rude good health.

I fear that Kyle will be quite absent in the short term; he is engrossed in logistical difficulties, namely moving.

Very nice. He's a generous lad, trust me I know.

I fear that Kyle will be quite absent in the short term; he is engrossed in logistical difficulties, namely moving.
Click to expand...

Ahhh, right so, well all the very best to you in the move Kyle, thanks for the heads up Buddy.

Just a word of warning to others: the bit on this pipe has ruined me for the bits on all my other pipes. They now feel like weirdly conceived and clownishly made approximations of what a pipe bit should be. By comparison, their "buttons" resemble actual buttons mounted edgewise on too thick stock, etc. Damn your hide, Kyle!

Glad it's working out for you. Nice pipe, and a surprising score! Conrats. :cheers:

Not sure how this thread escaped my screen, but that is one gorgeous billiard Richard! Congrats on being a member of the Jesse Jones fan club, his pipes are such a pleasure to smoke and appealing to the eye. :cheers: :cheers: :cheers:

Good to see you posting again Kyle, and good luck with the moving. I wouldn't wish the process on anyone.