I actually I hate that term - don't know why. Maybe "Pipe Dreams" is more suiting. At any rate, there are a couple pipes I've dreamed of owning - one of Richard Seyfried's briar-lined elk horn pipes, and a Boswell fishing pipe. I don't know if Richard is still making his pipes, and anyway, I've never seen one for sale anywhere. 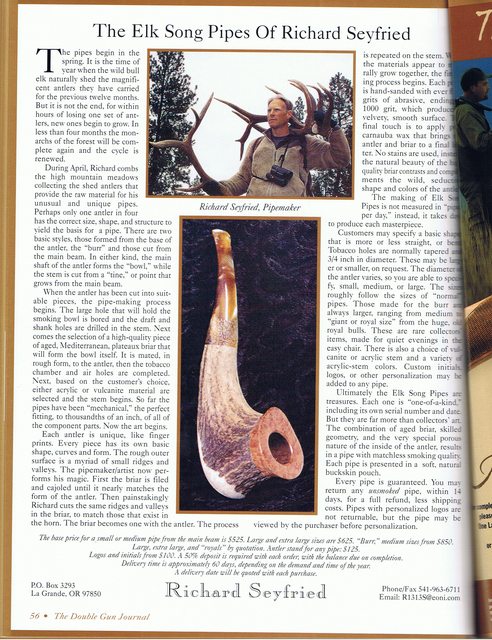 The other is a Boswell fishing pipe, and recently I had the opportunity to check that one off. It's a lovely pipe, a "shotshell" model, with the bezel between the shank and bit make of shotshell brass (nickel in this case). It's unsmoked and mint. I paid a bit more than I cared to, but hey,,, But now for the BUTS... when it arrived I was troubled by a couple things. 1) The bit is fixed and not turnable nor removable, and I see future issues: trouble cleaning the pipe, replacing a broken bit, etc. Hard to understand why the maker felt it necessary to construct it so. 2) the lanyard is permanently fixed, set in a hole in the briar under the edge of the shotshell. Also it's on the underside of the shank which causes the pipe to hang upside down on the lanyard. The other Boswells I've see had the lanyard in a groove around the shank and the lanyard is adjustable and removable, and since I was already making plans for replacing the nylon cord lanyard with something classier, that was a disappointment.

So, after a lot of soul-searching, back it went. The seller is a nice fellow and a brother pipe smoker and fisherman who had bought the pipe for himself and decided to sell it for the same reasons I've listed above. So, back on the trail; will be interesting to see if my interest for owning one was sated even though our time together was brief...
Last edited: May 17, 2022

Don't really have a pipe bucket list but would like to find a vintage Comoys in good shape. The two I have now are great smokers.
T

Right now I'm saving up for a Comoy Specimen Straight grain. I always wanted a Former and finally checked that off my list.

Would like to get a vintage Kaywoodie to smoke PA and CH.

Great idea for a thread. Thanks. I have quite an on-going list. It's mostly makers I'd like to try more than shapes, and most of those makers have a unique rustication style that I find attractive. Like Roush or Cooke, for example. Rustication is where it is at for me. The shaped one I'd like is an Ardor full bent ball (#305?). I used to know a guy who collected those, and some of his were as big as an official baseball, but the chamber wasn't too terribly large either. They were really comfortable in the hand. Oh, and I'd like to find an Ardor like JimInks posts the faceted bent.

Finally scored 2 nice vintage Kaywoodies off Ebay over the weekend. Pics to follow once delivered.
J

Ranger107 said:
Finally scored 2 nice vintage Kaywoodies off Ebay over the weekend. Pics to follow once delivered.
Click to expand...

Did those Kaywoodies ever arrive? I'd like to see some pics.