Reorganized my display shelf so that I have all my favorite pipe and baccy combos ready at hand. The idea of having a pipe dedicated to one or two specific blends is not so much to build "cake resonance" as some sources have discussed, but just so that when I have an hour break to grab a pipe I don't have to think about it. I've tested all these blends in numerous pipes, and each pipe has seen numerous blends, but I have found these combination have the best synergy (for me). Previously I'd just randomly grab a pipe and blend and then I'd remember that those two didn't play well together and that I should have paired the baccy with a different pipe. Now, no more brain strain, or need to get on my computer and refer to my notes. Of course I still have my cob cabinet and plenty of other "free agents" available to try new blends or tweaks, but this system is a step in a long process to help simplify things. Macro and micro views: 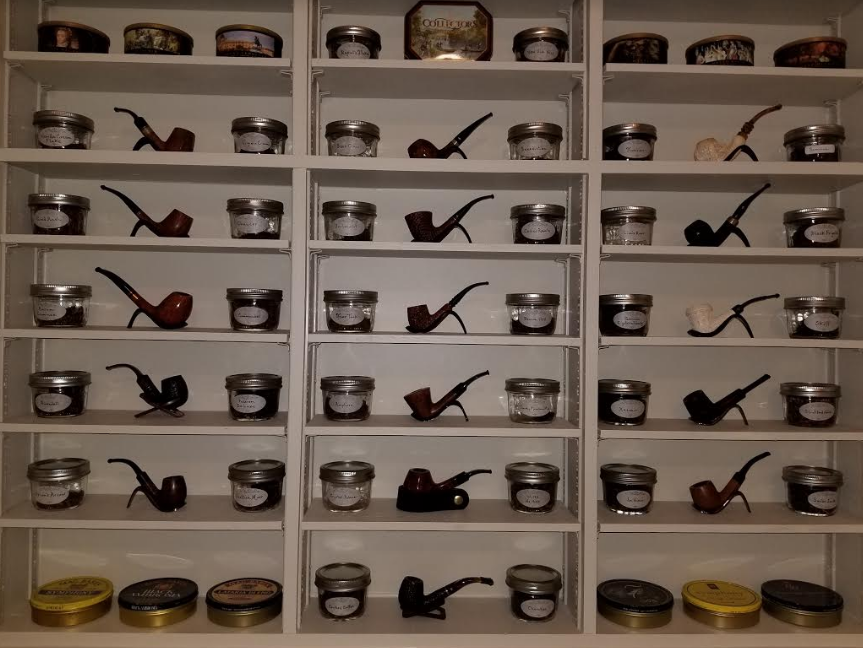 I've simplified. Almost all my pipes are in pipe racks in a finished basement room. Tobacco is labeled and canned or jarred. On the main floor, in the kitchen, is a ginger jar with about a pound of a recent blend. There are seven corn cobs, all Dagner or Mark Twain with acrylic stems and neodymium disc magnets super glued to the exterior bottom of the bowls. They are magnetically stuck, in no order, to the side of the refrigerator. When it's time for a smoke, I grab one and fill it, then smoke. The 70+ pipes downstairs, as I've noted ad nauseum, will probably wind up in a shoe box on my driveway when my daughters clean out my house after my funeral. When the jar of tobacco in the kitchen is near empty, I'll refill it.
When I grow up, I want to be as organized and thoughtful as Brunello, but, alas, I don't expect that to ever happen in this lifetime.
As for the tobacco that will ultimately remain, undoubtedly including the 100+ tins of recent Dunhill blends that are probably worth less than I paid for them, one of my daughters will probably find a "suspect" cigarette shop owner who will take the tins off her hands for a $1.00 a tin.
I should add, that when this all occurs, I'll be deceased and won't give a s***.

B
Hello From Long Island, NY

What are your Pipe and Tobacco plans for 2021
2