Operating in an FOB like Oak Creek is a dream assignment. Hundreds of miles of rugged terrain separate the base from the front line and the days seem to pass in a lazy seasonal march through the Rockies. I had just finished putting up 3 cords of wood for the winter when the lieutenant gave me orders to go into the nearest local village and fetch a few supplies for the Labor Day weekend. I was under strict orders to purchase only the essentials — wine, scotch, chipped beef, and matches — and to stay away from the more dubious sections of the town.

I just walked out of the store and thought I’d check the post to see if there was any word from the home front. I noted a small, experimental aircraft humming straight down the valley toward the FOB at the far end. I thought this was most unusual as the airspace is highly contested and we almost never see enemy incursions this far south of Steamboat Springs.
Walking back up the road toward the front gate, the sound of the small aircraft grew louder and I looked over my shoulder in time to see the first of a dozen cigar-shaped incendiary devices being hurled from the open cockpit as the plane droned by me overhead. I could almost see the maniacal expression on the pilot as he chucked his payload creating potholes all the way to the gate. His last throw was exceedingly lucky as it hit the antenna on top of the HQ and even from where I was standing, I could see flames coming from the base of the tower as I heard the pilot shout, “Greetings from Oregon!”
I began running toward the gate. As I arrived, I saw the firetrucks speeding across the tarmac. I could hear the anti-aircraft guns distinct report as they unsuccessfully chased the plane over the nearest hilltop with return fire. I was met by my faithful dog, whom I call…Dog for lack of imagination. His panting and whining made me wonder if he sensed something bigger in this seemingly random attack.

Dog and I slowed to a jog as we headed for the HQ, Troops were pouring out of the barracks and several pilots were scrambling to the now open hangars. I glanced at Dog and he barked at something over my shoulder. I heard them before I saw them — two supersonic F-16’s low and fast shot past the base and made a wide arc at the end of the valley before beginning their attack run. I was ready for the inevitable blast of the Maverick missiles I knew would precede them. I was not ready for the concussion as the scored direct hits on the anti-aircraft defenses and motor pool. The thick smoke hung in the air, smelling of HH Flake and Penzance.
As I got up from the ground, the lieutenant popped her head out of the chow hall and said, “Run! Save your self!”, before ducking back in with the box of wine I’d appropriated from the locals. I presumed she would head for the relative safety of the larder. Dog growled and I had the eery feeling that another explosion would soon rock the compound. I shouted farewell to my lieutenant and sprinted for the comms bunker, convinced that the underground room was the safest place left.
As I ran, huffing and gasping for breath up the hill toward comms, the unmistakable chop-chop of rotary aircraft brought my attention to the silhouettes of three attack helicopters rising like dark vipers over the eastern ridge. The PA speakers blared, “Incoming! Balkan! Dunhill!, Solani!”
I jumped into the ditch beside the road just in time to hear the whizz of three Hellfire missiles as they sped toward the hangar and parked aircraft across the tarmac. The heat from their impact singed my beard as Dog and I peeked over the road. Another volley took out the two remaining buildings, supply and the chow hall. The markings on the choppers indicated they were from outside Colorado. Foreign fighters from Indiana, Florida, and Kentucky.
But these were only harbingers for the Australian F-18 Superhornet who released a nightmare of hellish tobacco ordinance.

I realized that the post was now decimated. My head swam with a variety of thoughts. I had never before been forced to look at the wanton cruelty of mankind in such close proximity. How could people (and I presumed these pilots must be people too) visit such devastation and destruction on such a peaceful place. I also realized I might be the only one left standing in the airfield. Dog looked anxiously at me and barked sharply three times, perhaps also sensing we were alone in the open. His barking brought me back to reality. A low hum had begun to fill the eastern sky. I knew this must be the coup de grace.
My truck was at the base of the hill, past where I had run earlier. Sprinting headlong toward the truck, I saw an apparition that convinced me I needed my eyes checked — assuming I would survive this onslaught and be able to find an optician who wasn’t out-of-network. I saw what looked like a B-29 Superfortress bearing the Alaskan State flag lumbering toward the FOB from the other end of the valley. I dove into the truck with dog at my heels. Fumbling for the keys, I started the engine and roared down the hill toward the only road leading out of the valley to the Northwest. I almost made the first curve when the Daisy-cutter hit the base, sending my truck careening off road and into an Aspen glade. Pembroke smoke rose in the distance.
My vehicle was toast, but dog was uninjured by the blast. As the Alaskan beast hummed out of sight, I gathered what supplies I had at hand and, with Dog at my side, began moving back to survey the carnage.

If anyone should find this message, please forward it to: Squadron Leader, Brothers of Briar.

P.S. Thanks gang. You’ve truly humbled me by your generosity and your fellowship. I doubt there are many (if any) groups that can rival the kindness and sponteneity of the BoB. You very nearly moved my lieutenant…er my wife to tears. If pressed, I may have to admit I was a bit misty eyed myself. You’re the very best of humanity - God bless you.

P.S.S. FOB Oak Creek will be avenged! I’m putting you on notice (you know who you are!) I’ll just wait for the plate to cool as this dish is best served cold

Dottleman":ksobflk2 said:
The markings on the choppers indicated they were from outside Colorado. Foreign fighters from Indiana, Florida, and Kentucky.
Click to expand...

Well, damn, that's better than any of the alliterations thus far......... Well spoken!

Wake up call has been confirmed!!

Having surveyed the damage up close I'm prepared to give a sitrep:

Working on pictures now. It's been a while since I posted any photos so bear with me... 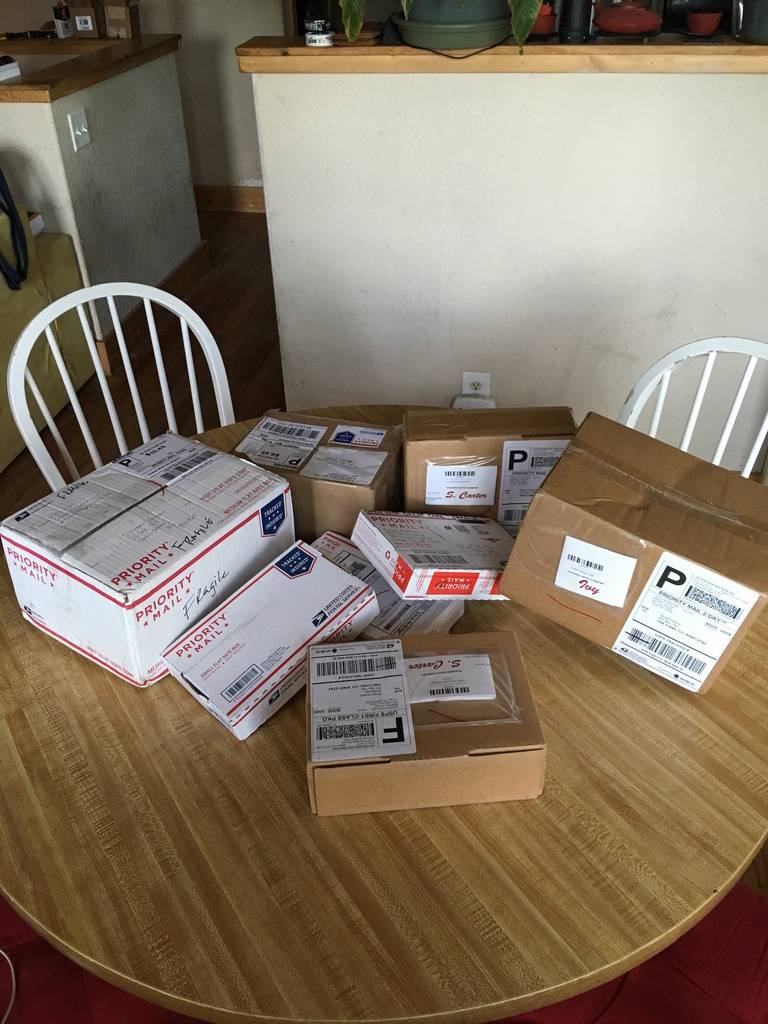 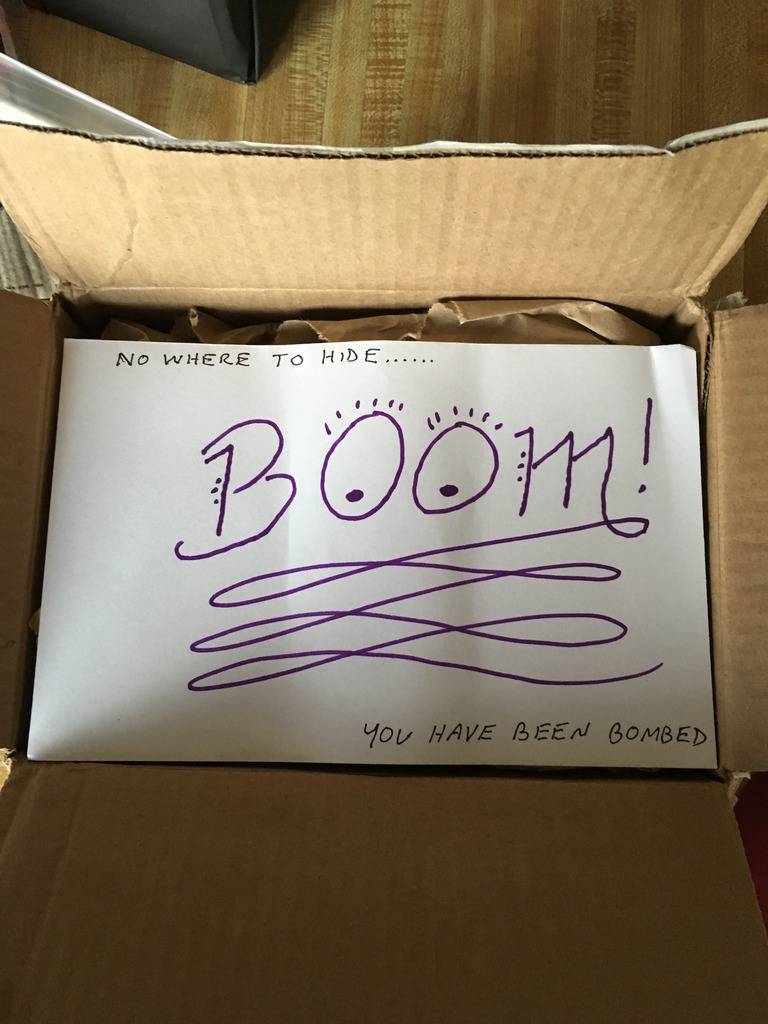 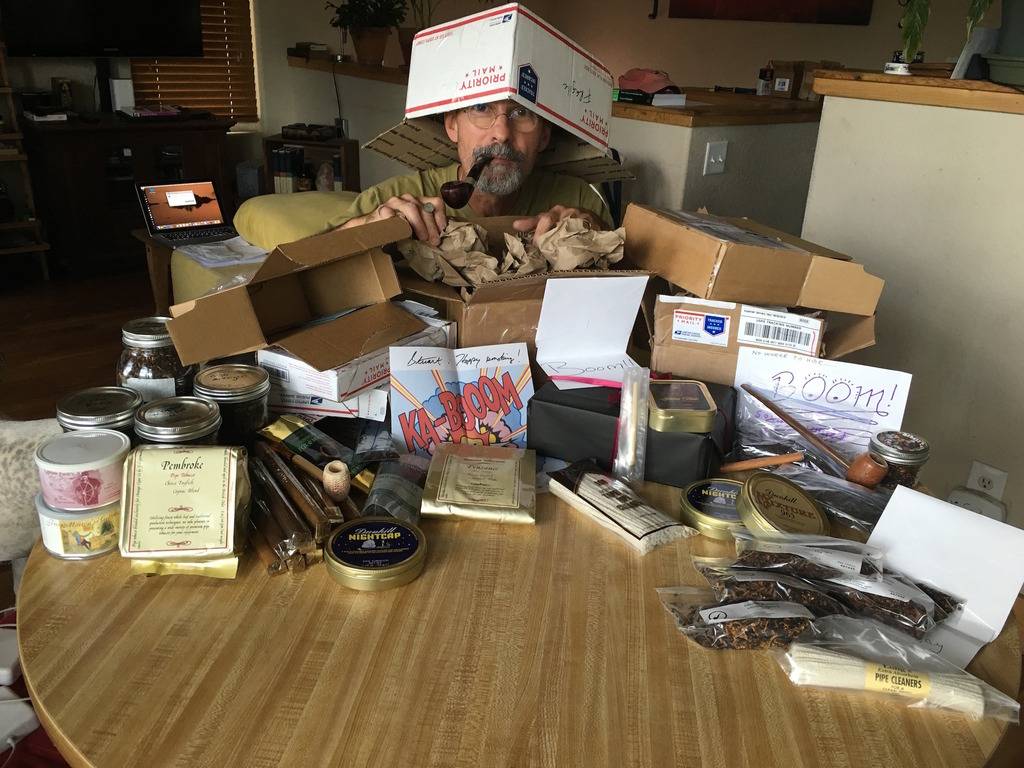 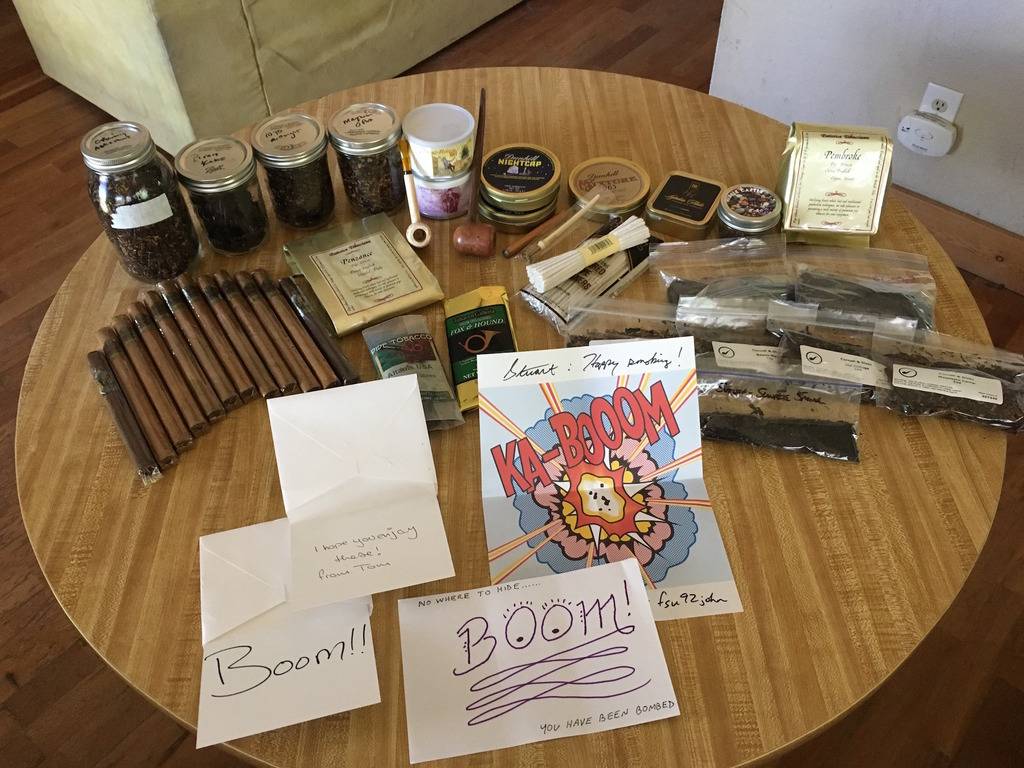 Once again folks, a heartfelt thank you. You're amazing and I look forward to roasting your tails in a future run!!!

I like the helmet in the "under attack" picture.

There may be stragglers still, so don't get too comfortable.

I understand what the "bombs"

Ha! Great pics and what a haul!

Looks like a pipe by the Wiz in there too?!

I loved the story! Thank you for taking the time to put that together for us

Congrats on the goodies. Those Casa Torano cigars are some of my all-time favorite morning smokes with coffee. Enjoy! And like someone else mentioned, don't get too comfortable... 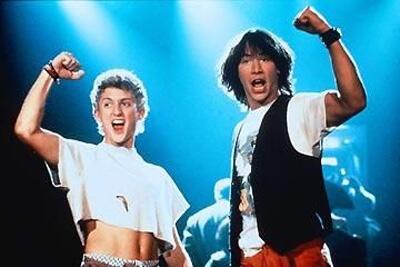 Fr_Tom":yz5qvlft said:
There may be stragglers still, so don't get too comfortable.
Click to expand...

That's what scares me Tom!

By my count there were 11 bombers and I saw 8 bombs in the picture. Don't get too comfortable or stray too far from the bunker...

Such a good bombing. I'm really glad we were able to pull it off. And wonderful story! Your tale has made me laugh most of the morning.

Fr_Tom":d2dkkr26 said:
By my count there were 11 bombers and I saw 8 bombs in the picture. Don't get too comfortable or stray too far from the bunker...
Click to expand...

Well just when you think it’s safe to come out….


This afternoon…not 24 hours after the devastating strike that left FOB Oak Creek a smoking ruin the air raid sirens announced another strike. Dog and I found ourselves at a complete loss for anything resembling shelter so we took cover under a honey-wagon parked outside the smoldering enlisted club. After the all clear was sounded we searched the area for clues to who had initiated such an utterly unwarranted attack. Among the evidence of this newest and most unconscionable atrocity were:

Upon reporting this to the Lieutenant (still comfortably sipping wine from the box she had me requisition earlier), she immediately recognized the severity of our plight and ordered a scouting mission to the local village to see if any stray rounds had hit any critical infrastructure such as the liquor store, florist, or local grocery. I was also encouraged to take careful note of which stores had Cabernet on sale and to appropriate another box with all speed - as Pork Rinds and Scotch sounded like a volatile mix to her. I’ve never met another woman in my career who wore those bars with such authority!

I will send word if anymore unexploded ordinance is found or any further unprovoked attacks occur. In the mean time I urge my fellow briar smokers to sleep with one eye open…

Too soon to climb a ladder?