That pipe sure is pretty, though!

Just heard from Kris at the Black Swan. He spoke with Mr. Tom Palmer from Peterson (owner and CEO), and while he wasn't aware of the previous set of issues he did say that he'll personally undertake to put this into the production que.

However, he also stated that due to the quality of the briar needed, a rise in cost of raw briar, and the time to hand finish it to my desires, the cost would be a bit more than originally quoted.

After all this I could hardly say no. So it's going ahead after all, and I should have an ETA shortly. And now I'll go and edit the original title of this thread!

Awesome! Yeah, I noticed the title had changed, and I'm glad that it all worked out. :cheers:

Kris told me earlier today that the production time should be roughly 2 weeks from today, as Mr. Palmer directed that this should be placed forward in the production que. After which it will take a bit of time to get to the Black Swan for shipment, say a week or so.

Kris estimates that it'll be a month, more or less, until I take delivery.

This is what I call top-notch customer service!

That's a welcome turn of events!

Wow! Worth the wait.

All that for a little black box with a letter x in it?

Ya, it turned out pretty nice. And the crappy pic doesn't do it justice, but it's the one that Kris from the Black Swan Shoppe took on his camera phone before shipping it to me.

I got everything I asked for too -

No dip staining
No bowl coating
No acrylic finish, just several coats of carnuba wax
2 stems, one black and one amber
Walnut stain

I was concerned that asking for no bowl coating might be a deal breaker and thus void a warranty, but this didn't seem to be the case. I figured that Peterson coated all their bowls these days, and had a bad experience with one such specimen a few yrs ago. The new Pete's I've bought that had a bowl coating since then were removed down to bare briar and didn't want to hassle with that again.

The grain on this is not particularly spectacular, yet it's not unattractive either. Mostly straight grain in areas and mottled in others. Only one rather small pit area on the shank which is unobtrusive. No fills that I can see. The sterling silver work looks flawless.

The stem fitment and draw seem spot on with both stems. Why did I get 2 stems you ask? Well, I like the look of both on this style and thought I'd like to have options. Our own Cart (Ron) was the inspiration for this since he had a similar pipe made with the 2 contrasting stems, so I thought "why not"? I sure love this style of the XL26, and my previous red XL26 is a clear winner so I have high expectations for this one as well.

Okay, so I'm sure y'all wanna know how much it cost right?  :?: Sure ya do and I'm not one to disappoint-

Kris from the Black Swan Shoppe quoted me £250 + shipping from the UK. And at the exchange rate I consummated the deal ($1.32) it was approx $330 before shipping. Upon Kris' recommendation I chose the extra insurance option for up to £250 purchase price, which came in at £13.50. So all in this came to approx $348 and the credit card fee for the international transaction will be added, but that won't be terribly significant.

So you could say that for $350 I finally got the pipe I had been Jonesing over for all these years since the initial correspondence between me and the Black Swan Shoppe. And that's commensurate with the price of the XL26 in a natural finish (which is more rare) which I linked in the first post on this thread, and which was listed by SP.

So the upshot is that Peterson didn't really charge me any extra for a pipe built to my specifications compared to the XL26 on SP's newsletter, and that pipe had a bowl coating based on the pics and I'll bet a dip staining as well. So color me pleased in all ways.

Let it be known that I certainly don't spend this kind of coin on a pipe on any kind of a regular basis. In face there's been only a few instances that I've spent over $200, and those were for commissions from carvers here on BoB.

So this is a very unique situation, but after Kris reaching out to the CEO of Peterson I could hardly refuse. And Kris did advise me that this particular pipe would cost more than my previous XL26 due to increased costs relating to briar and such. OK, I get it.

It certainly took the efforts of (first and foremost)-

Kris from the Black Swan Shoppe going to bat for me and his relationship with Mr. Tom Palmer, CEO and Director of Peterson.

Mr. Tom Palmer, for putting this special order through to his production crew to be be first in the que, based on the history of this monumental situation. (I would've said fustercluck but that would not be pc!)

I hasten to add that Kris and the Black Swan Shoppe are absolutely first rate to deal with, and they go well and beyond in terms of customer service.

And I'm reminded once again Peterson doesn't normally do special orders like this. It must've taken one of their specialist finishers out of his regular routine to do this for one customer, where he could've been producing several or more pipes that day.

Kudos to Peterson and the Black Swan Shoppe!

Ozark Wizard":b7zpxh74 said:
All that for a little black box with a letter x in it?

You can't see it Ozzie?

The link you sent me was good. Nice pipe, and dual stems is a nice touch! Good job all around!!

Ah! That's identical (except maybe mines a little lighter in color) to mine BD, I see there now selling them with the extra light amber stem.
Maybe I started a trend! 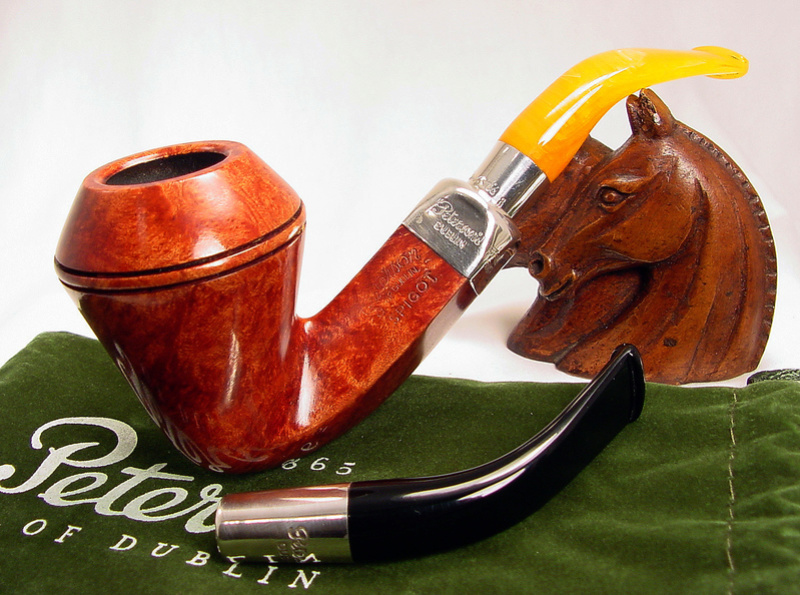 Glad you finally got yours sir!

I've always wanted an XL26. This is an extraordinary example! Patience pays off! Absolutely gorgeous!

Quite the thread going on here. Glad to see that all is well and that the end result is exceptional service and happy customer. I am a Peterson fanboy unlike many others. Fills don't bother me if they are lower grade pipes, and if the chambers are coated I just remove that myself. I can understand if others disagree that's your prerogative. I love the history of the company, love the styles/shapes and also a fan of the P-lip. Your special order commission from Peterson is indeed a great pipe. Glad that it all ended well after such a long time.
Share:
Facebook Twitter Reddit Pinterest Tumblr WhatsApp Email Share Link