So my trusty Maestro sitter had never been reamed since I got it over a year ago, and it gets smoked daily. As a result, it acquired a cake that started to get to the point of closing almost half of the inside diameter! Actually I only just noticed this recently. Don't ask how or why, I have no explanation...

Also not sure why that pipe seems to build cake thicker and faster than some of the other pipes that get a daily workout, but I digress.

I'd not really had to deal with such a thick cake before, and took my time while I carefully scraped away with a pipe tool. All while trying my best to stay even from top to bottom.

The result was that the top opening was now reamed pretty much down to the thickness of a dime (which is what I've read cake should be) yet the bottom half was still kind of narrow, but still more open than before.

Not wanting to ream too much on the bottom half I decided to stop there and see what the results were, so I fired up a bowl later that evening.

That pipe is pretty much dedicated to just 2 blends right now - P&W Churchill and #78. Both are what I'd call "medium English blends" and have a moderate amount of Latakia.

Now to the point - since reaming, the flavor of these blends has changed somewhat. Hard to describe just exactly how, yet both seem to lack the complexity they had before. I've smoked the pipe with those blends for about a week now and am kind of disappointed in the results.

So what's going on here? I'm pretty used to the way those 2 blends taste and now they are different after the reaming. Or did I just get used to the flavor changes gradually over a long period of time while the pipe built cake?

Almost felt like I should go back and ream the bottom half better, but now I'm not so sure. I really like this pipe so would hope to get it back smoking good again. Perhaps after I create some new cake it'll return to the former performance?

Never got any replies to this - but after half a dozen or more pipe loads beyond the radical reaming I did, the Maestro now has gotten back into the mode it was in before. Which is to say that the blends I normally smoke in this once again exhibit their fine qualities.

What I have learned from this (hopefully) is that first and foremost I won't let the cake build up so much in the future. And second, after a reaming I can probably expect the flavor profile and nuances to be somewhat askew for some x number of bowls.

Perhaps this is old news to all y'all, but it's brand spankin' new to me!

get one of these. You still might have to do a little pocket knife work if you let it get thick like you talked about. But this tool will adjust to the right diameter you want, does a pretty good job. I got mine off ebay for about 20 bucks shipped 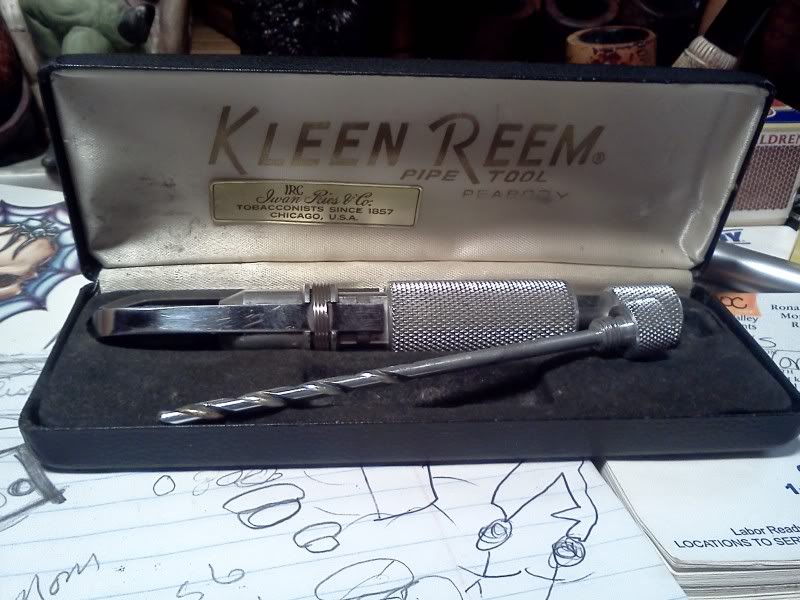 plumbernater":9x03cact said:
get one of these. You still might have to do a little pocket knife work if you let it get thick like you talked about. But this tool will adjust to the right diameter you want, does a pretty good job. I got mine off ebay for about 20 bucks shipped

Thanks plumber. Where can I get this? Iwan Riess? I just googled the site and didn't find it.

Look at this one http://www.ebay.com/itm/Vintage-Polo-Reamaster-PIPE-TOBACCO-Cleaner-Reamer-Tool-Box-/260948269746?pt=LH_DefaultDomain_0&hash=item3cc1ba9ab2

Reaming the cake... Did it mess up that bad? A stern warning would probably straighten it out.

So to revive an old thread, I finally got in the unit suggested in this thread. Mine is called the "Senior Pipe Reamer", but is identical to the pics. Bought mine brand spanking new from smokingpipes for about $25.

So I used it for the first time yesterday. Reamed 6 pipes in various states of excessive cake. Learned the technique pretty fast too - just use the smallest setting to begin with and then gradually expand until the cake is where you want it.

Given the shape of the "nose" (or furthest part into the bottom of the bowl), I'm not 100% confident that I've gotten deep enough given that not all of my pipes are this shape. IOW some of the pipes I reamed have more or less perpendicular walls and at least one or two had tapered walls.

Nonetheless, I'm reasonably happy with the results. I managed to stay pretty concentric and not get one wall smaller than the other. However I did manage to get a big blister on my right hand middle finger where I gripped the knurled handle. Don't have any calluses there like some of you. Still have a couple more pipes to ream. Maybe I'll use a glove this time!

I see that there are several more styles of reamers, and one that has a "T" handle with an expandable blade. This might be less fatiguing on the hand. Anyone with experience?

I have both the Senior Pipe Reamer as well as a British Buttner. For most of my reaming, I prefer the British Buttner, since it simplifies the work by maintaining the interior shape of most bowls, as well as reshaping some bowls that tend to have a more squared bottom.

I do use my Senior Pipe Reamer on some of my larger bowls, on which the BB is simply too small to get the job done.

Dutch":63ppj83t said:
I have both the Senior Pipe Reamer as well as a British Buttner. For most of my reaming, I prefer the British Buttner, since it simplifies the work by maintaining the interior shape of most bowls, as well as reshaping some bowls that tend to have a more squared bottom.

I do use my Senior Pipe Reamer on some of my larger bowls, on which the BB is simply too small to get the job done.
Click to expand...

Sounds like the Buttner would be wise to have as well. Looks like it might also be better for tapered bowls, which was a concern of mine. I'll be picking one up next order.

Thanks for the suggestion Dutch.

Yeah Brewdude, that's what I meant to say, that the BB works much better on tapered bowls, but it does have it's limitations. However, for 95% of the pipes in my collection, the BB works awesome!

Pocketknife with a rounded off tip. Works like a charm.

That may be, but I'm too much of a klutz!

Your best pipe maintainence friend in the world is an aluminum pipe nail.

Use the edge of it to scrape the sides of the bowl after each smoke.

Keep doing it and you will end up with a very thin, smooth, very even cake that isn't punky & crumbly.

IMHO, you only want just enough to insulate the briar just a little. If it hasn't been sealed with some "pre-carb" substance, the briar interacts with the tobacco.

Remember the raps about "good-tasting" pipes ?

This may sound, um, curious --

I've seen sandpaper tubes in some pet shops for the perches in canary cages. It's a way for the little yella fellas to keep their nails trimmed. It occured to me that they might also serve in the place of a reamer to precisely maintain the char in the pipe bowl without introducing mechnical devices.

I've used a pipe tool -- both nail and Czech -- to chip the char. This has worked well for the pas 40 years, though sometimes I knock off a bigger chip than intended. I haven't used a reamer, because my practice has been toward frequent touching up rather than waiting for the bowl to be half blocked.

So has anyone tried use of the sandpaper boidy perch for smoking pipe maintenance?

KevinM":eefb0xwi said:
So has anyone tried use of the sandpaper boidy perch for smoking pipe maintenance?
Click to expand...

No, but I think the idea is brilliant!

I use an old toothbrush between reamings to knock loose stuff off the inside.

KevinM":trmgepcx said:
So has anyone tried use of the sandpaper boidy perch for smoking pipe maintenance?
Click to expand...

Haven't seen that done but I've used sandpaper wrapped around a dowel. Works a treat.
It's handy to be able to vary the grit from coarse to fine for heavy duty "reaming" to the fine cake touch up.

I've got exactly that Senior reamer, and it works great, but only on my smaller diameter bowls. It seems to expand up to about 22-23 mm, and I've got several larger bowls that it just doesn't open up enough to take the cake down to the level I want. Anyone suggest a reamer that can handle larger bowls?

However, sandpaper around a pencil, (or my finger for the finishing touch!) or lightly working with a sharp pen knife seems to have worked for several decades for me.

My Observations on the Subject of the P'Lip
2

Digging through my tobacco larder and...HoCheMunga!

D
Hello from So Cal