Renovation of my 1940 kitchen

Ok, so after retiring and moving north to an old but renovated farm house I started in early February to renovate the only room that wasn't done - the kitchen. I'll try to recall how to add some photos.

Construction isn't my forte but I'm good at breaking things. So I got busy pulling things out, I mean right to the studs. Back in 1940 they didn't insulate these homes I guess. Basically it was built, (starting from the inside) vertical 7/8" tongue and groove Hemlock and Ash, tar paper, horizontal planks, then the fully 2x4 studs, more horizontal planks (now on the outside), tentest and then horizontal ship-lapped wood siding.

Besides several old mouse nests (in the walls and one in the ceiling) I found neat little artfacts that had been dropped behind the counter over the years; necklaces, buttons, darning needles, a file, knives etc. But the two coolest things I found were, 1. a receipt from a long gone car dealership for a new 1959 Plymouth, made out to the original house owner. He traded in his '54 Ford and the total price came to $1998.00. 2. a gun registration dated 1940 made out to the same owner for a Winchester 32 lever. It was signed by the local Police Chief (the Police Force has long been taken over by the Provincial Police) and had all the owners particulars, ethnic origin, occupation, intended use for the gun, serial number. I couldn't believe we had a long gun registry in Canada back then. I wondered if it had something to do with the war being on. The really interesting part was when I showed it to my neighbor. Without knowing, he ahd bought the gun from a local and had never known it came form his neighbor who had passed away when he was a boy. I gave him the registration to frame.

One not so nice thing I found was a series of live wires that led to an old switch box that was buried behind the wall! I discovered that there was an old entrance that led out the back. They had for whatever reason buried the door behind the wall and put kitchen cabinets there. You can see the old door frame behind the stove in one of the pictures.

Further, all the floor joists for the second floor were simply nailed to the studs, not supported by a plate. I fixed that and stopped worrying - the house after all has stood for 75 years with no sagging anywhere.

When I got the kitchen out, I sprayed expanding foam everywhere, insulated, vapor barriered, dry walled and now the pros have taken over to tape, mud and install the kitchen. It's looking good now although I don't have any recent photos of the taped and mudded product.. We'll paint later this week and the kitchen goes in next week. Yaaay! :cheers:  :cheers:  :cheers:

Too much fun - especially doing all the work outside in the snow!. 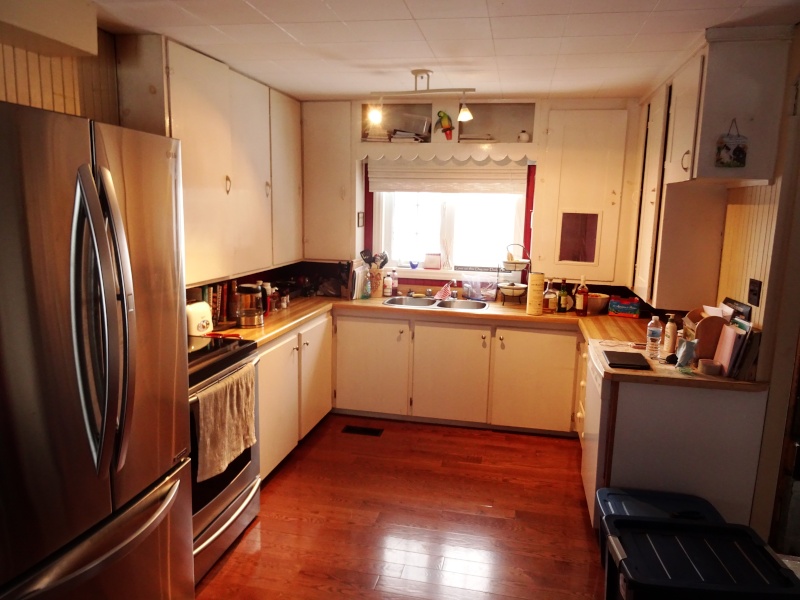 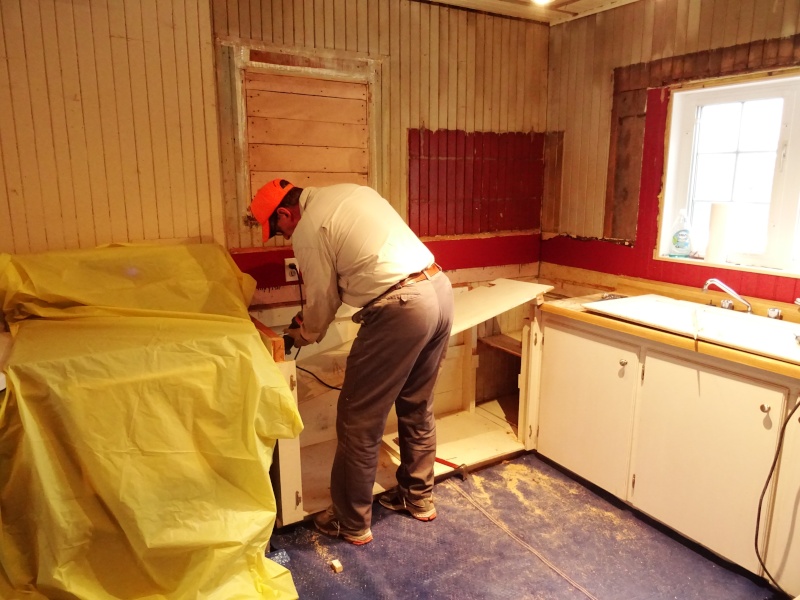 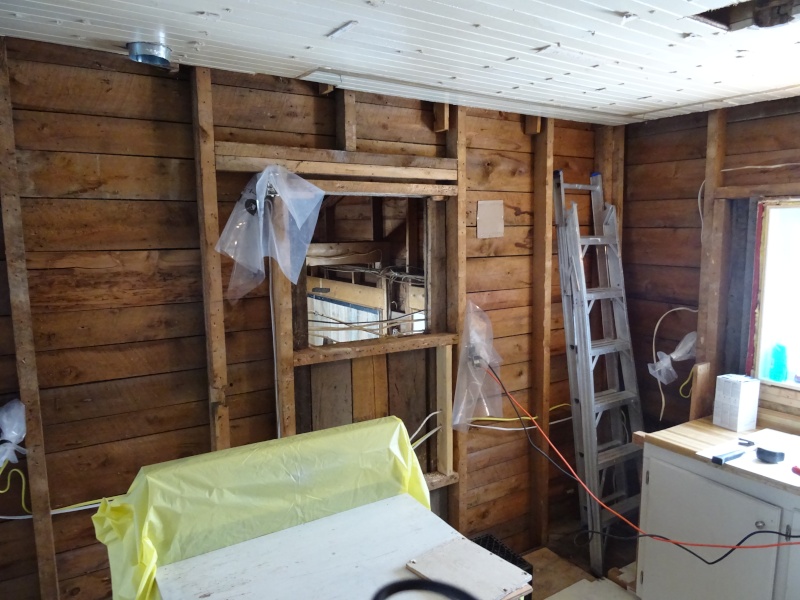 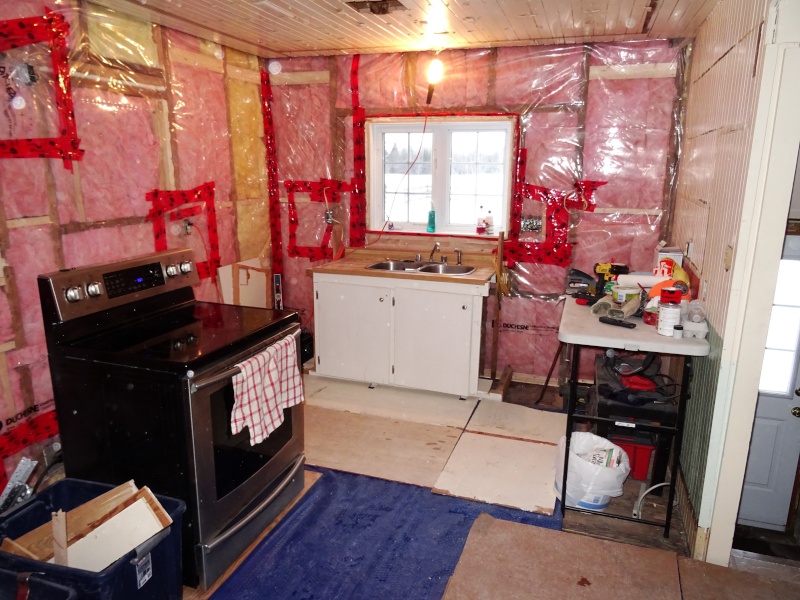 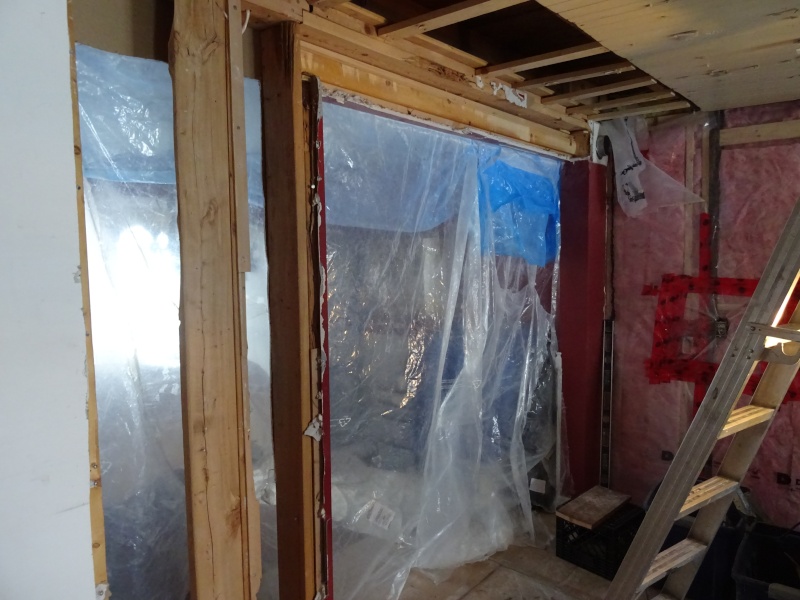 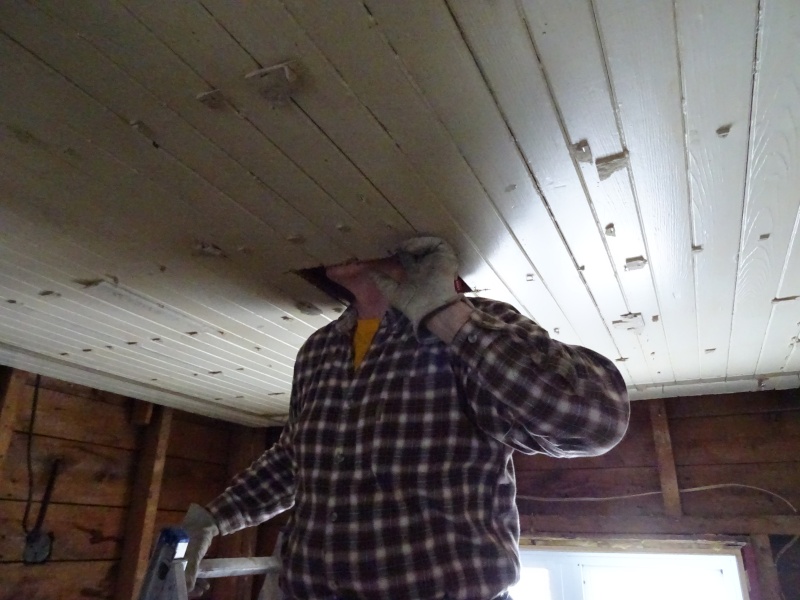 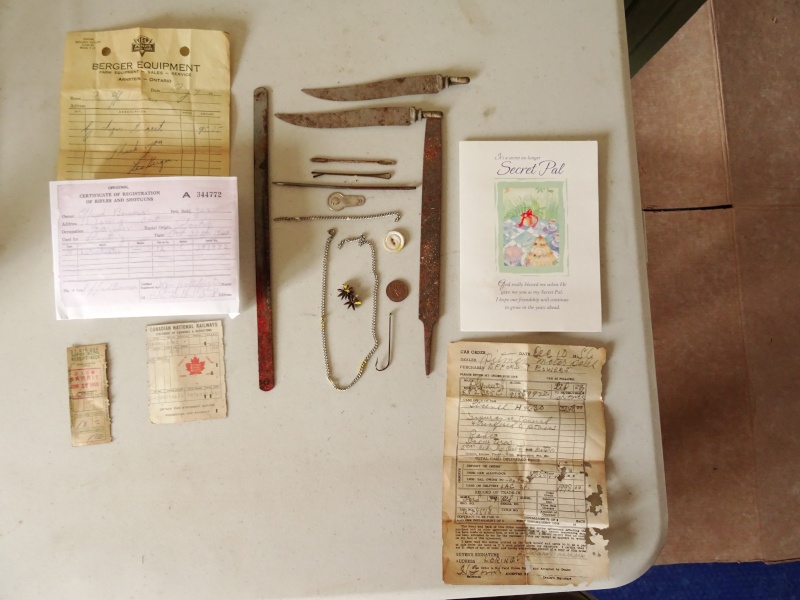 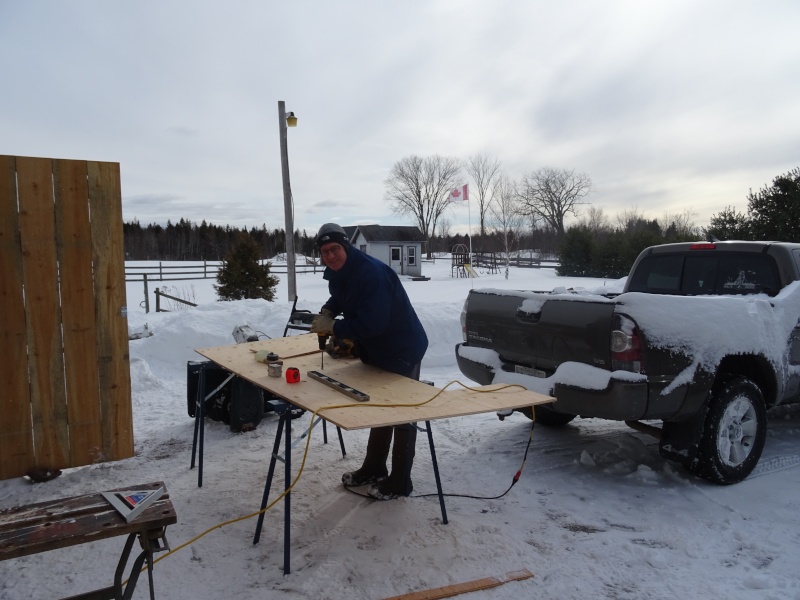 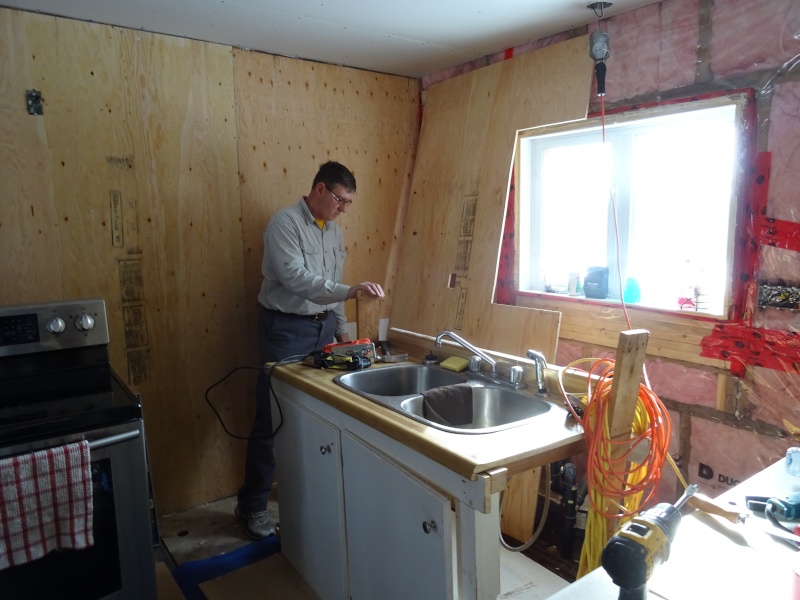 Ah yes classic construction techniques of the time lol. Owned a 1900 house that was built on railroad tie foundations so I'm guessing you don't have much to worry about without the bottom plate. That old house is still standing. Very interesting relics you found too. Always did have a soft spot for all that old bead board. Gives a place a real classic look but holy crap what a PIA to get clean from 60 years worth of cooking grease........so gross. Looking forward to the final pics.

Kitchens and bathrooms are IMHO the worst rooms to renovate as they create such disruption to actually living in the house. Good on you for taking it on yourself!

French Country Kitchen! We had that kitchen in our house. Only it was older. Tore out two kitchens and two bathrooms at the same time. I do not recommend ever doing that. But it worked and we have much nicer spaces now.

One part home improvement, one part archeology. Very cool stuff! Looks like you did a great job so far and I'm sure the end result will be worth the disruption.
Mike.

Helluva project you going on there beeman. But looks like you have it well in hand. The first pic with the finished kitchen looks great. Nothing like DIY!

My first house I bought back in '84 was one of those that also seemed to have no insulation at all and this was in the Milwaukee, WI area! I ended up using blow-in fibre between the upright supports as I didn't want to tear off the drywall. Drill a 1" hole in the lower and upper section of the area and blow in the insulation through the bottom hole until it came out the top. Then plug the holes and mud over. Rinse and repeat.

Took a couple days to do the whole house, which wasn't big but very tedious. And I was new at this! A couple times I ended up blowing insulation into the chase for the forced air heating. That was a real joy..........NOT!

There's nothing like that feeling of accomplishment!
Good luck with the rest!

Nice work on that project. Cool treasures you found too.

For a man who says "construction is not my forte..." THAT'S one HELLUVA NICE piece of work ya done there guy !! DAMN NICE!!  :twisted: :twisted: Question: why Crown molding on just one side of cabinets and not all the way around? :twisted: :twisted:

Thanks for all the replies and interesting stories. The first picture actually is the OLD kitchen! Hahaha. I guess my photos give in too much justice. It really was bad...to narrow to fit a plate in, cupboards wouldn't close etc.

There have been several delays since the original post: my friend/carpenter who was actually mounting the cabinetry, (I wouldn't tackle that) was ill for a bit, then we had to send for a new cabinet as the one was damaged, then the maple syrup season arrived and my friend, who also does that was busy for a while, then a big snow storm....my friend also plows. So three weeks later the cabinets are now and I'm putting on the hardware. We were short some crown molding and we are waiting for the counter top also. I'm considering cleaning up some of the old beadboard, (thanks for the proper term for it) to use for the back splash.

Anyway...we're getting there. I'll send some more photos including of the finished product but I see the method for posting them has changed and I'm not sure how to do it.

Since I am neither rich nor handy around the house why would you guys buy houses that require so much updating?
Do you see the beauty in thew house or do you just like a challenge?

Bub":4tb48xi6 said:
Since I am neither rich nor handy around the house why would you guys buy houses that require so much updating?
Do you see the beauty in thew house or do you just like a challenge?
Click to expand...

I don't enjoy construction very much but I know enough about it to tear out stuff and prepare it for the "finishing" experts to come in - with some guidance. I have found a certain amount of satisfaction however in doing the work that I've done on this project and I've learned a lot.The house was completely redone except for the kitchen so after this is completed the big stuff is done. We didn't put in a high end kitchen either but what we've spent has increased the value of the house by at least an equal amount. We'll make some other minor changes later; a different vanity in the ensuite and main bathroom, enclosing part of the deck outside so the black flies don't eat us during that part of the season, painting.

The house where we were living was nice but for us, when I retired I wanted some land where I could, hunt, grow my honeybee business and enjoy the country and my hobbies without fighting for permission with others. I couldn't have afforded that where I was. So we bought an older mostly updated place on 104 acres in an area with 1000's of acres of crown land to explore. We sacrificed some conveniences for what we feel is a better and more affordable quality of life. So far, so good.

That's my story and I'm stickin to it!

This is late in coming. I have my kitchen 98% finished. AS I said earlier, I had someone else put in the kitchen after I did the prep work. Just the back splash, window frame and a small piece of crown molding to go in - which I will do in the next month or so. Unfortunately, (not really though!) the good weather arrived and I had to get busy with outdoor stuff, namely my bees and building new be equipment. Man is it ever nice having a usable kitchen!! Hope you enjoyed my journey. 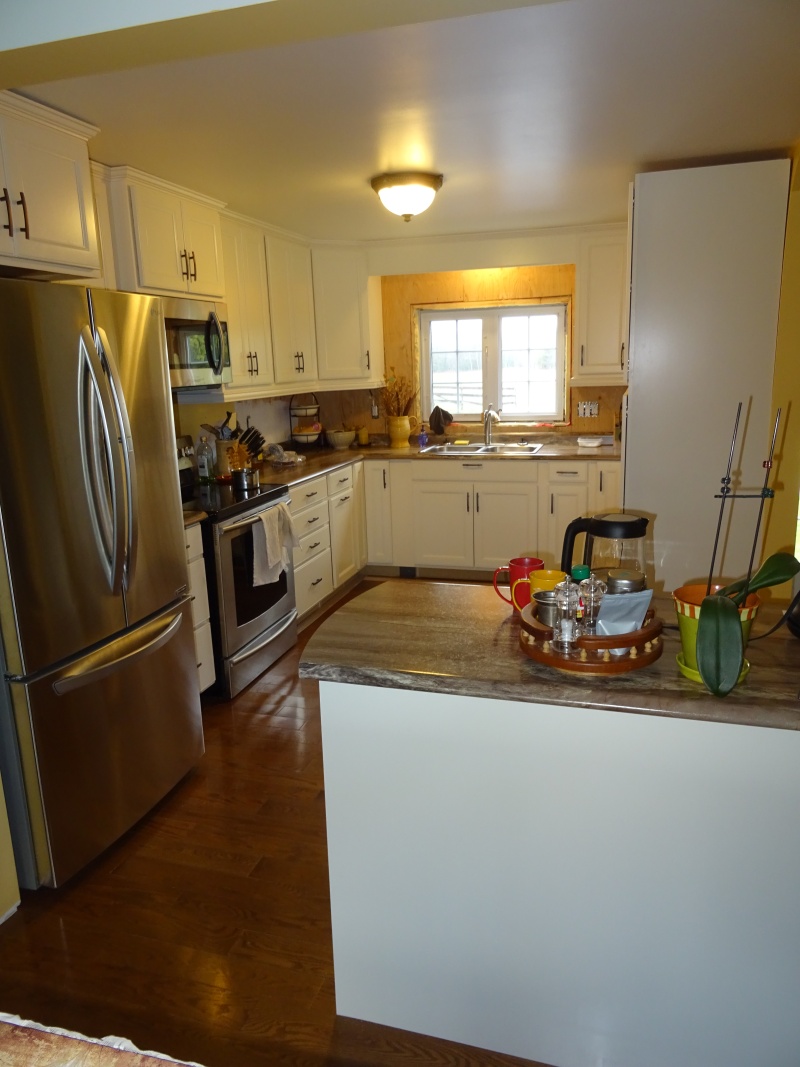 beeman86":5otsnz9y said:
This is late in coming. I have my kitchen 98% finished. AS I said earlier, I had someone else put in the kitchen after I did the prep work. Just the back splash, window frame and a small piece of crown molding to go in - which I will do in the next month or so. Unfortunately, (not really though!) the good weather arrived and I had to get busy with outdoor stuff, namely my bees and building new be equipment. Man is it ever nice having a usable kitchen!! Hope you enjoyed my journey.

Looking great beeman. Must be a wonderful feeling!

WWII Pics of my Grandfather

Den, Shed, Shop or Cave - Do You Have One of Your Very Own?