(The below Photo was resized by the Management in order not to make the text size too small to read. Have a nice day.)
Click to expand...

Thanks for that. Couldn't figure out how to resize it on my phone.   :roll:

I'm enjoying some stroopwafels and jersey creams with my coffee this morning.  I'm going to have to find them both locally...I'm addicted.

And a big Thank You to Carlos for putting this together again this year.
Click to expand...

Once I get back to my computer I can resize my photos... In the meantime, I'm trying some smoke and practicing my switchblade QuickDraw I got from my Santa!

Santa rolls a natural 20, scoring A HIT A MOST PALPABLE HIT!!! 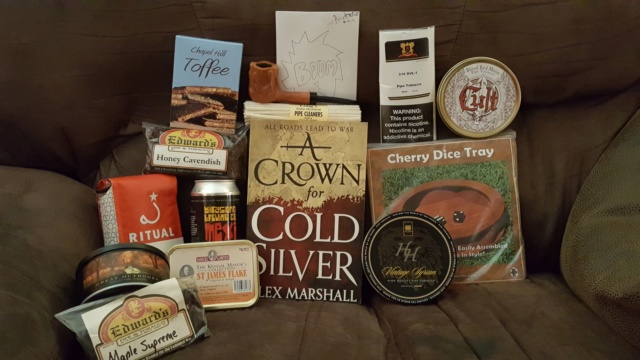 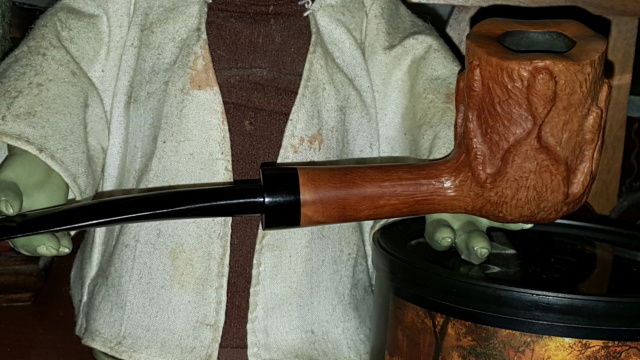 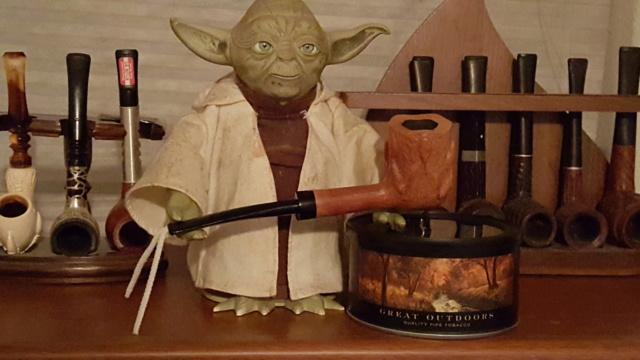 I was slogging through the mire of my day to day, when my oldest decided to go check the mail.  She came back with an alabaster colored package of suspicious dimensions and alarming heft. With the recent images of Briar Beagle's yard, and home (or whats left of it) in mind, it was with no small amount of trepidation that I carefully opened the ominous looking parcel.  Inside I found the following: 100g tin of HH Vintage Syrian, 1.5 oz tin of Sutliff Great Outdoors, 50g tin of St. James Flake, 50g tin of Cult Blood Red Moon, 1.5oz pouch of Sutliff 516 RVL-1, some Edwards tobacco bulk Maple Supreme and Honey Cavendish, some Chapel Hill Toffee, a can of Birdsong Brewing Co's Mexicali Stout, 1 pound of Ritual Monte Alban coffee, a pack of Longs pipe cleaners, a cherry wood dice tray (for rolling your dice in style), a signed, autographed and super spiffified copy of "A Crown for Cold Silver" by Alex Marshall, and last (but certainly not least) a very VERY cool HS Studios straight billiard pipe with melting wax finish.  And all of this was accompanied by an awesome hand written note with artwork.  I've never tried the Vintage Syrian before, but the description sounds very exciting and it smells absolutely wonderful.  Great outdoors and Blood Red Moon have long been on my list of blends I wanted to try, but been unable to due to being so financially challenged lately.  I'm finding that I like Virginias and the description for the St. James Flake sounds like it should be right in my wheel house.  Heck, who am I kidding? They all sound like they're in my wheel house!  The only problem with this embarrassment of riches is trying to decide which one to smoke first (at the moment, I'm leaning pretty heavily towards the Vintage Syrian).  As for the dice tray, that was a truly insightful gift, and having had Chapel Hill toffee once before, I will be guarding that like Smeagol with the ring "PRECIOUS! MY PRECIOUS!! STAY AWAY NASTY TEENAGE NIBBLY THINGS!  MY TOFFEE! MY PRECIOUS!!" Hiss Hiss.
Ever since I first heard about "A Crown for Cold Silver" and the Crimson Empire trilogy, I've been wanting to read it, as it's written in one of my favorite genres and rumor has it, some of the characters smoke pipes. The fact that it's an autographed copy makes it even more special.

With as rough as things have been lately (and I know I certainly don't have a corner on that market), the timing of this package couldn't have been better.  An absolute blessing.  I know it's been said before, but this group of folks we have here is something very very special.  So, from the bottom of my heart, thank you secret Santa, and thank you Carlos for putting this all together.  :afro:

Some of you guys just have "the knack". The knack for putting together outstanding gifts. Well done Santa's!

Oh. And when I say "guys", I also mean you ladies. I speak it like Y'all. All inclusive.

I am utterly shocked and offended.......NOT. Using the term "guy" for me, doesn't bother me at all. I also refer to myself as a Craftsman, not a Craftswoman. It's just way too much work to e PC

Ozark Wizard":5leybkw2 said:
Man, you would think I was out of the woods, but Santa found me yet!

Snuffs, tobaccos, fish clubs, and clothing. Once all is sorted I'll post pictures! 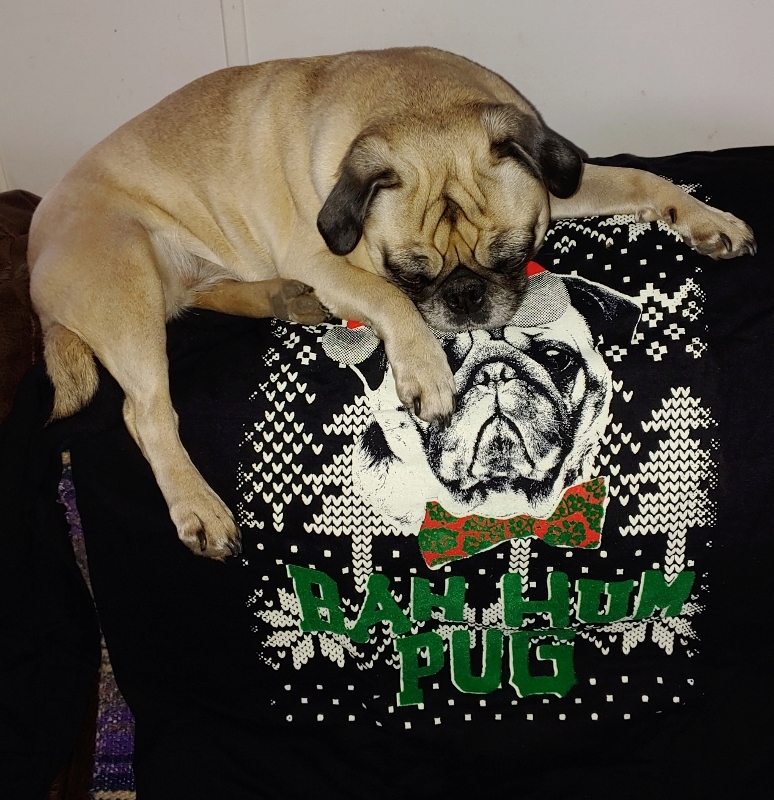 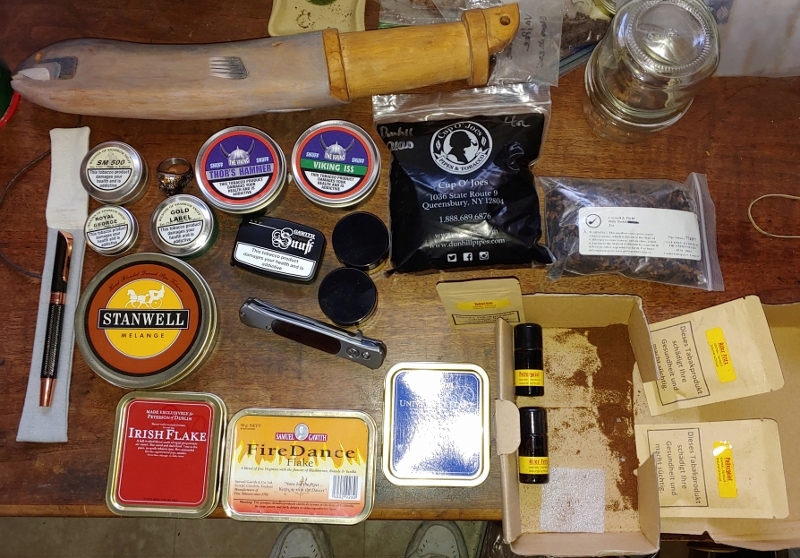 This is an interesting piece. Got some weight to it too! 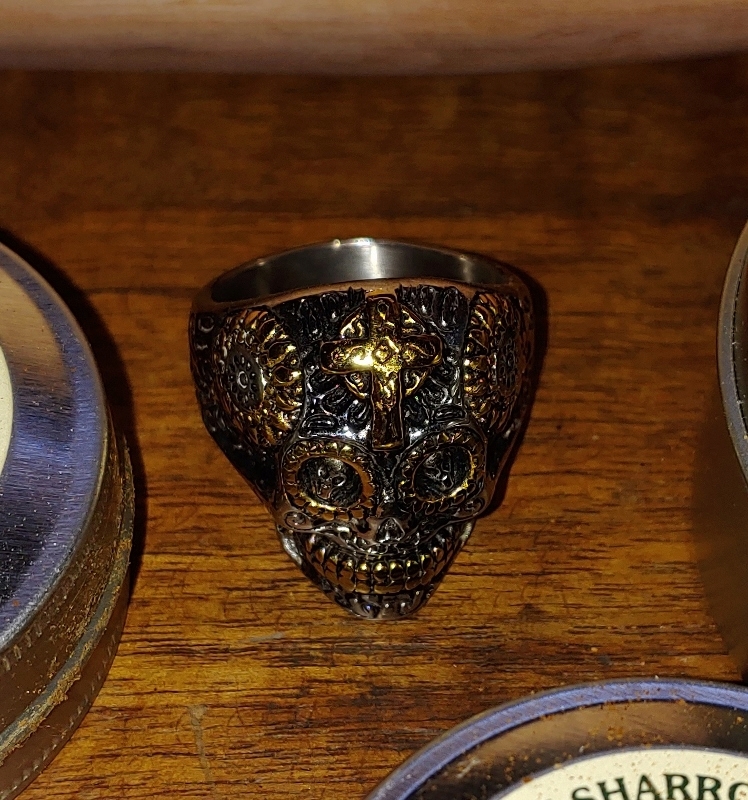 I think that's the lot. Plenty to process!

Here's the other side of the fish whacker, B'Lana is posing for scale... 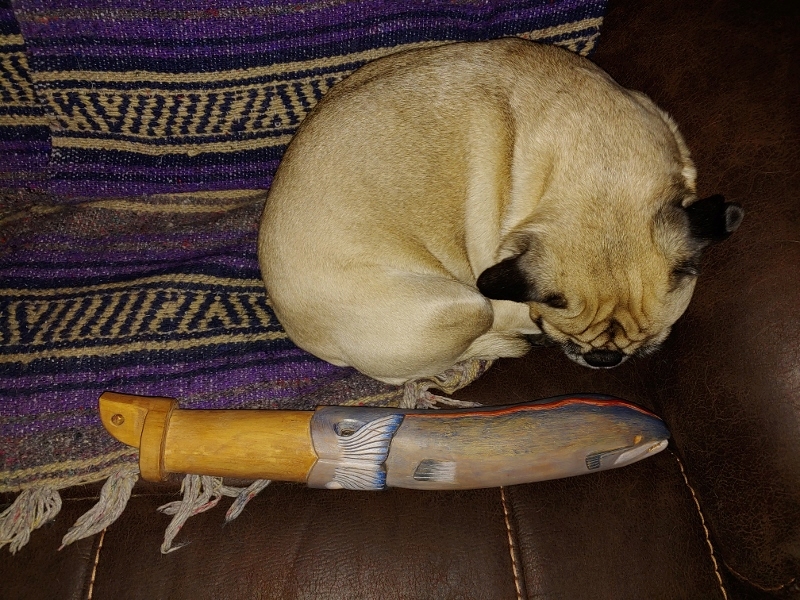 Well, it's finally on its way and will be to its destination by or on Monday! I am so sorry for the delay. I am actually awaiting one or two final pieces for Secret Santa that I will have to ship when they arrive. So Mr Recipient, expect another package to come later...

Carlos, thank you for your patience and for putting this together, it is a heck of a lot of fun. I will already be looking forward to next season. I pray all of us will be here and be in good health. :cheers:

Ozzie - what a beautiful girl.

Fairly perky for a Pug, too.

Those Santa's have really pulled their load. Very nice!

Fairly perky for a Pug, too.
Click to expand...

We'll, if you recall the last time I visited y'all, Watson and I were engaged in a little game of first blood hand dancing. She's queen of that game. Of course, according to the scars on my hand Watson is no slouch. The pugs play, but on their terms, eh? :lol!:

Woohoo! Way to go Santa. I just hope we do not get into sending a pug to each other in future Secret Santa's.

Well, the head Santa surely didn't check his book of Good Little BoB's, as I ain't been very good this year, (just ask my wife) but my gifts were outstanding!  Or perhaps, in comparison to the rest of the world, I wasn't too bad this year?  That sure speaks poorly of the world today, doesn't it?

Anyway, it included an abundance of goodies, including:
Party Mix (start any snack with sugar and then add salt and you've got a winner)
His wife's creation, (Wiley Wallaby Australian Style red liquorice dipped in chocolate almond bark, (remember my comment about starting with sugar?  And yes, it's spelled correctly, you colonial, rebel twits!)
2 packs of cleaners and a nice tamper
2014 Chenet's Cake
2014 Six Pence
2007 Christmas Cheer
2006 Kajun Kake (ready to explode, it's so bulging out)
2006 Guilford Courthouse (also ready to explode)
2006 Thunder Road (again, ready to explode, what is it about the 2006 canning year, lots of wild yeast in the air?)
2006 St. James Flake
2006 Stockton
2005 Elizabethian Mixture
Gotta love a guy that sends tobacco that the youngest tin is still 4 years old, and most are over 12 years. 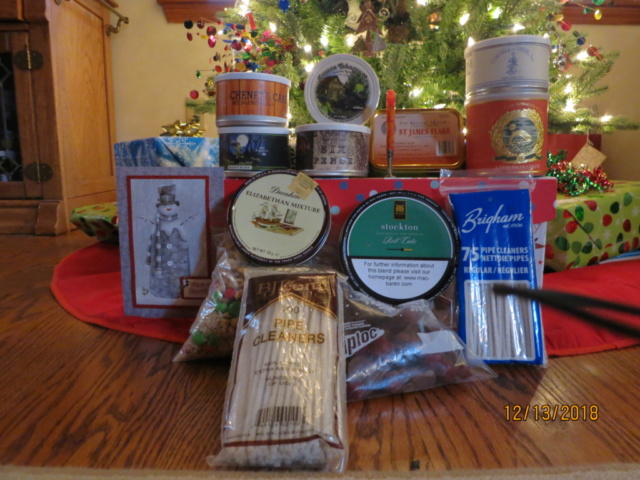 This photo was re-sized by the Management so that the text here and elsewhere in the thread could remain large enough to read. Ho Ho Ho!

That pipe rest is pretty cool. Very rustic and manly

Awesome gifts Natch! You must have been better than the rest of the world's rascals!!

Pipe rest?  Am I missing something?