Being that Shelby Foote has always been one of my favorite authors, and knowing that some of the brothers and sisters here are still fans of reading, I thought I would share this blog I found online a few weeks back.

Written by a former local tobacconist in downtown Memphis, it gives a personal glimpse of the author and his relationship with the pipe. 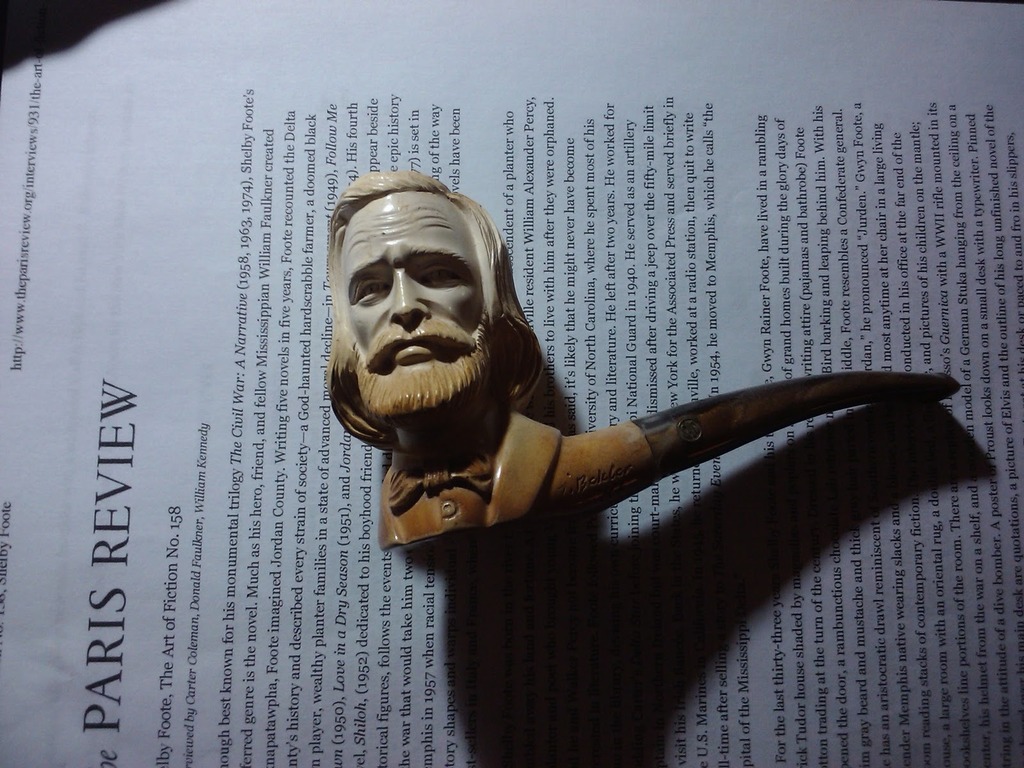 The photo above is of a pipe that once belonged to Shelby Foote. It's a meerschaum by master carver Beckler in the image of Robert E. Lee.

In a past life I owned a small pipe & cigar shop in downtown Memphis and Mr. Foote was a regular customer (William Faulkner was a customer before my time, but that's another story). I acquired this pipe when Mr. Foote's son came around selling off some items after his father had passed away. I bought it with an eye toward profit, of course, but then found I couldn't part with it. How would I prove its authenticity anyway? I can't even prove it to you, so you'll just have to take my word.

I inherited Foote as a customer. His routine was that every six weeks or so he'd call and tell me he would be down that day, and I'd put his order together - two pounds of a tobacco I called Mello Mix and a few canisters of Edward G. Robinson pipe tobacco. He handled the blending himself. Sometime that afternoon, he'd pull up to the curb in his little white BMW, come in and pick up his package and then leave. I'd include an invoice and he'd mail a check within the week.

It's how he'd done business with the previous owner for decades and I saw no reason to alter the arrangement.

But then I did. Or, I tried to. One day he called to say he'd be down and I said, "Mr. Foote, your house is right on my way home in the evening, why don't you let me take this tobacco to you so you don't have to make the drive downtown?"

My thinking was that when I showed up at his doorstep, he'd show me in and ask me to sit for a bit. Maybe we'd have a drink and talk about writing and reading and whatever he might want to discuss. I'd get to see where he works, where he wrote the three volume The Civil War and some of his novels.

Instead, he thanked me and told me just where, outside of his front door, I could leave the package.

Be sure that, after pulling into the Footes' driveway that evening, I made my presence known. I got out of my car and slammed the door as loudly as I could and took my time walking to the door, hoping for that spontaneous invite. I left the tobacco and, as I was getting back into my car, I heard someone calling to me. I looked around, and then up, and saw the old man leaning from an upper window, from his turret, waving down and thanking me. I waved back.

Shelby Foote did not cotton to visitors or small talk with strangers. But he did, at some point, allow interviewers from The Paris Review into his home and I've just read that interview. It's fantastic. From the beginning when the interviewer writes, "Dressed in his regular writing attire (pajamas and bathrobe) Foote opened the door, a rambunctious chocolate Lab retriever named Bird barking and leaping behind him" to his tales of time spent with Faulkner, his writing process, the evils of Hollywood and, of course, the Civil War.

I took to heart, though, the answer he gave to the poorly-worded question, "What kind of advice would you give young writers?"

To read, and above all to reread. When you read, you get the great pleasure of discovering what happened. When you reread, you get the great pleasure of knowing where the author’s going and seeing how he goes about getting there—and that’s learning creative writing. I would tell a young writer that. Of course I would tell him: work, work, work, sit at that desk and sweat. You don’t have to have a plot, you don’t have to have anything. Describe someone crossing a room, and try to do it in a way that won’t perish. Put it down on paper. Keep at it. Then when you finally figure out how to handle words pretty well, try to tell a story. It won’t be worth a damn; you’ll have to tear it up and throw it away. But then try to do it again, do it again, and then keep doing it, until you can do it. You may never be able to do it. That’s the gamble. You not only may not be able to make a living, you may not be able to do it at all. But that’s what you put on the line. Every artist has that. He doesn’t deserve a whole lot of credit for it. He didn’t choose it. It was visited upon him. Somebody asks, When did you decide you wanted to be a writer? I never decided I wanted to be a writer. I simply woke up a writer one morning.
Click to expand...

I love to read known, established writers' advice to those of us sitting at our desks, sweating. It makes me think that what I think and do with my pencil and paper each day may, one day, amount to something.

I count myself lucky having known Mr. Foote, as much as I could know him. There was the odd time or two that he lingered in the shop and we talked. We talked, not of writing or the Civil War, but about pipes. He loved his pipes - the Canadian was his preference with its short mouthpiece and long, straight shank - and, by his count, he had thousands, many sent to him by fans.

I'm a fan and I appreciate having a pipe of his now. It sits across the room atop an old Underwood typewriter, perfect for me to look up to for inspiration and to remind me to stay right where I am and to work, work, work.

Cool, indeed. I just read this and the linked Paris Review interview. Interesting man. Loved his commentary during the Civil War series on PBS. Thanks for posting.

Just a silly quibble: There was a featured article on Foote in Pipes & Tobacco magazine a few years ago. In it he said that his pipe tobacco was EGR mixed two-to-one with what he called "rough cut," which I always assumed to be Granger. Now I wonder, having nothing better to do at the moment.

Thanks for posting Dutch. This is great stuff.

I enjoyed reading this...