Somebody got me today

“Now that 450 is an awesome writing pen. My wife tried it and absolutely loves it. She said she wished it had a black in it because she would like to borrow it. That’s the reason I inked it up with robert oyster fire and ice.”


Wow!  Be careful what you disclose. lol

This is part of a post from earlier this week. And I never thought anymore about it coming back to get  me. Well today while I was outside cleaning the condenser coil on my air conditioning. The postman pulls up in front of my house, and I go see what’s in the mail. And there’s a package addressed to Mrs. Noel Vickers. The only time she mail addressed like that are dr. bills and credit card offers. So I go lay her mail on the hallway table and continue to work on the air conditioner. A hour and a half later I’m in the shower and she busts in rakes me across the coils about starting a fake amazon account to buy pens secretly. So we playfully go back and forth on the subject but I’m still denying that I know anything about it. So finally she realized it’s addressed to her and there’s a note inside apologizing for me being a cheapskate and not letting her use my jinhao 450 pen. So they felt bad and bought her one. It’s a very pretty red ice color. And writes so damn smooth it not even funny. I really think it’s smoother than mine darn it. She absolutely loves it.

She told me again to say Thank You Blackhorse for then pen. I inked it up with Monteverdi midnight black. 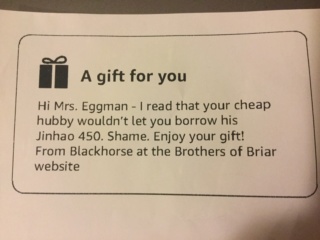 I do really well with gifts to other guys wives. :affraid: