Great work on this piece!

Andrew Thomson":gt8odhx7 said:
I have just read the most wonderful article on the history of Caminetto. I purchased a new one this week which had just been left in the shop for years as old stock. It has the "Caminetto" stamp on with the numbers 00. .31 and also has HAND MADE CUCCIAGO - ITALY on the other side of the shank. It also has the initials AR stamped in a circle and the pipe stem has the typical white moustache and the stem is silver with the numbers 925 stamped on it. Any ideas of the age of this pipe as it is stunning and the briar is of a quality I have not seen before as it is perfect. I love it so much so any help would be sincerely appreciated. Thanks.
Click to expand...

This is going to be of no help to you, but I've seen sellers confuse that AR stamping as an "original" Ascorti/Radice stamp that [I believe] falsely indicates it is a very early pipe, as in from the beginning of Caminetto. If it is a white inlay mustache, then it is from at least the 90s. I can't see how such pipes could be sold under the idea they are from the 60s. UNLESS...UNLESS...and I'm making this up out of fantasy land wine collecting weirdo realm, they were unfinished pipes found in an abandoned farmhouse where Ascorti and Radice vacationed with their families in 1969. At best, the way they're often sold is confusing, and at worst, buyers are straight-up being mislead.

I know this is an old thread but I know of a very large, very high end Camminette collection that is being sold. I had one dealer that has some ask me about values. I couldn't help but I was trying to remember who you were. Contact me if you want more info about helping my buddy out on value. :shock:
A

Hey thanks Zeno and Dave as that is helpful. I have found others for sale on the web with similar number equations so I assume it is genuine as the sellers all seem to be reputable. I purchased it from a really good pipe, cigar and whisky supplier in Cambridge so I don't think it is a fake. However you think it is likely to date to the 90's but doesn't that take it beyond the end of the Caminetto production period according to Josh's research? I would post some pictures but I am really new to the forum and I haven't a clue how to add any images to be honest. God that makes me sound an old fobbie so please forgive me.

Andrew Thomson":3fhq394g said:
Hey thanks Zeno and Dave as that is helpful. I have found others for sale on the web with similar number equations so I assume it is genuine as the sellers all seem to be reputable. I purchased it from a really good pipe, cigar and whisky supplier in Cambridge so I don't think it is a fake. However you think it is likely to date to the 90's but doesn't that take it beyond the end of the Caminetto production period according to Josh's research? I would post some pictures but I am really new to the forum and I haven't a clue how to add any images to be honest. God that makes me sound an old fobbie so please forgive me.
Click to expand...

I don't think your pipe is a fake. I hope I didn't imply that. My point was more that both sellers and buyers, but especially sellers, take liberties with information and folklore to gain the highest price. That's nothing new, but when you have so little documented information in a hobby, things can get really opportunistic and overstated. And some even simply make stuff up because they can. I'd believe joshoowah's information. In my eyes, there is old Caminetto production (the line of gold stamped logos) and new Caminettos (white inlay logos). Honestly, I've never differentiated much more than that, because I never had interest in them once they began being produced again (with the white inlay logos).

Check out the 60 Minutes piece on counterfeit wines from this past weekend. People spend $100K on a bottle of Thomas Jefferson wine without ANYONE in the chain (collector, seller, new buyer) confirming its provenance. It's in everyone's best interest if the lie is believed. Even the new buyer because they want to believe their new possession is the greatest thing possible in any given situation. It might seem counterintuitive, but it isn't.

I rarely ever check this area of the forums. I'm not sure I've ever seen this thread until yesterday. I would think I would have responded to joshoowah's call out to me. It could use some updating. That "HG" stamp is now not assumed to be of Harvey Grief fame, but of a shop in Europe. I think we discussed this elsewhere in a thread I started specifically about it, but my memory isn't so great this morning. I wouldn't want to muddy the waters with bad information.

I believe there has been at least one New Dear from the first couple years of production come on the market since this thread originated.
A

Zeno you are so kind and thank you from the bottom of my heart for taking the time to provide some useful information. I think it’s a genuine Caminetto and I can live with not knowing the date. It’s smokes so well so who cares and I didn’t pay too much at just under £300. However no box or anything else provided and again I am not that bothered as I purchased it because if looked so stunning from a bria quality and actual silver stem mount perspective. Thanks again and your time has been much appreciated in helping out a new pipe novice.
A

It’s a new Caminetto produced by Roberto Ascorti and the year is 2017. I managed to find all the details about the new models from Smoking Pipes so at least I know it’s genuine albeit not of the original A and R standing. Fantastic quality and smokes like a dream but the best I have is a Nording pipe as that smokes like heaven. Thanks again for the help.
J 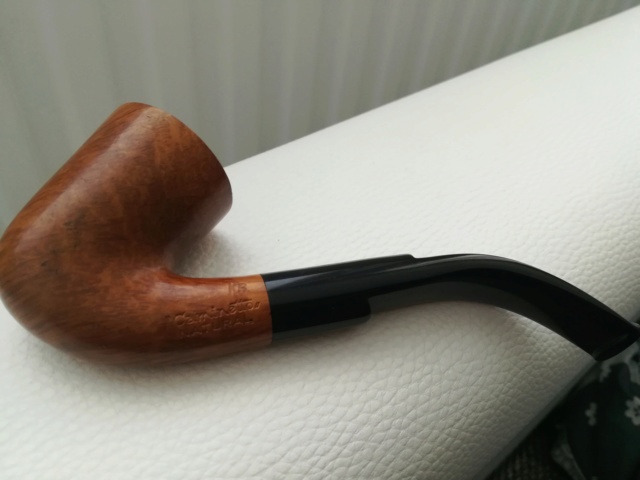 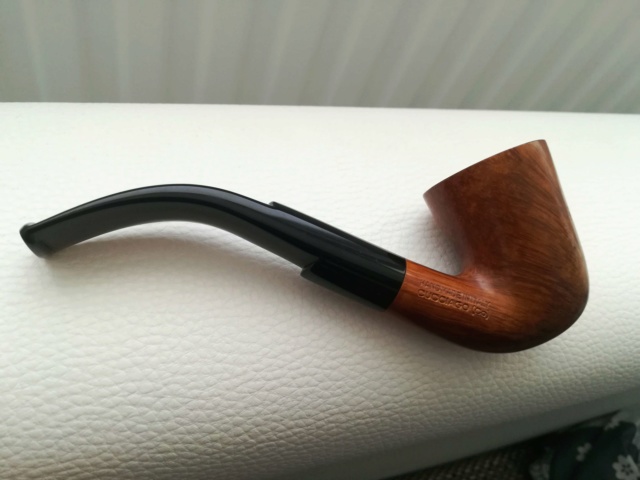 Based on an internet search, this appears to be a more recent Caminetto "high grade" and I could be wrong, but it appears that someone carved their initials into the shank. If this is the case I would assume it makes the pipe's value pretty low from a collector's standpoint if that's what you are after. Your pictures are too large for the forum format so it will be difficult for people to see them on a mobile device.
J

Thank you a lot for your reply

The letters are KS and i found this in the pipepedia: Another stamp that sometimes follows the "Business" one is "KS," which from what I know means "King-size" (this could be wrong, as there are pipes stamped with KS1, KS2, and KS3). 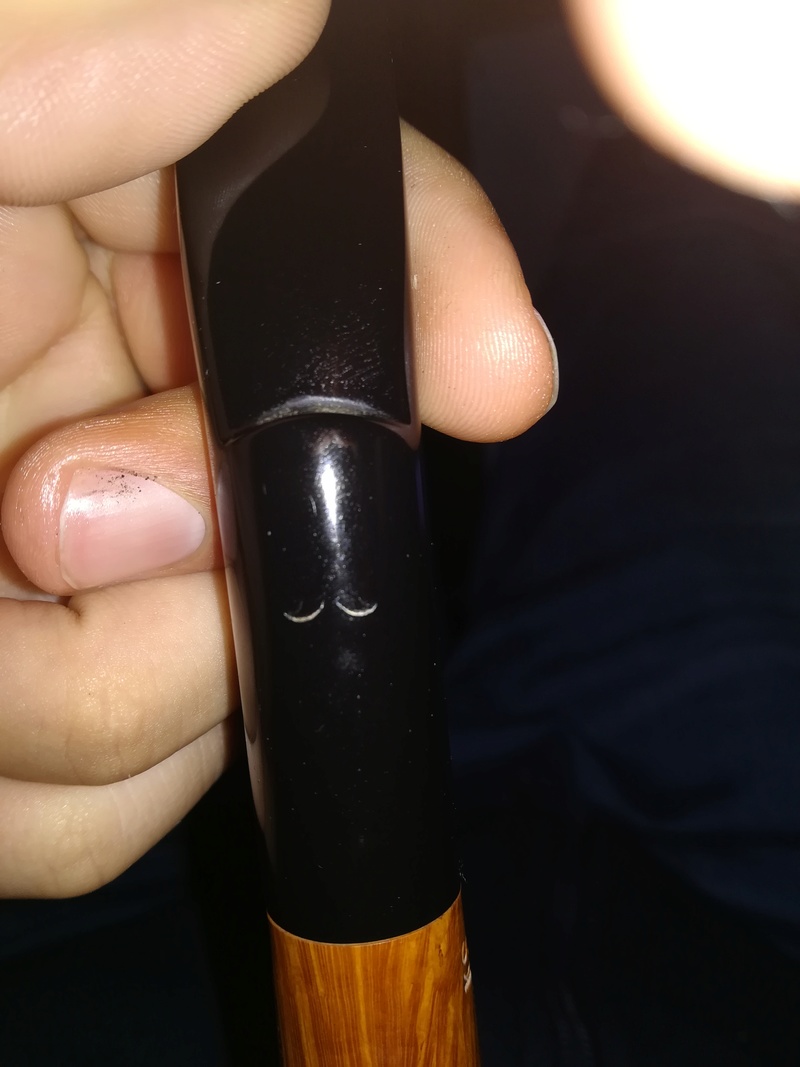 Okay, thank you a lot, this helped me

This was a fascinating article.  I enjoyed it very much.  I have two Ascorti Business pipes and
a Gianni.
L

The info has helped indentify rarity of my Caminetto Tinder Box aniversary pipe. 1978 catalog shows 250 rusticated were made but forum expanded that all pipes were numbered but my pipe was stamped 297/301 so the smooth finish would indicate only 50 were made, making same a very rare pipe. Tks for detailed research.
C

monbla256 said:
EXCELENT PIECE OF WORK !!!! I've no Caminetto's in my assemblege of pipes, having primarily focused on Brit and American makers, but I learned SOOOO much from your well written and thoughtfully presented work! THANK YOU !!
Click to expand...

Maybe you can help me, sir. I have one Caminetto I bought in Boston about 10 or 12 years ago. I has the Caminetto name in script, Hand Made Cucciago-Italy, and this stamped below the Camintto name, 8-R07. I read that R stands for business finish, but I don't know what R07 means. If you, or any other participant can help me out with that, I would appreciate your input. Thanks for your time and attention.
Share:
Facebook Twitter Reddit Pinterest Tumblr WhatsApp Email Share Link
Top