MN Vikings' GM Rick Spielman and coach Mike Zimmer were terminated this morning. It's pretty clear that the firings come as a result of the signing of Kirk Cousins three years ago for a multimillion dollar contract far greater than Cousins' prior record would merit. Cousins' lifetime winning record is slightly under .500, but his record against teams with a winning record, at the time of his initial signing was 18%, now, even lower. His percentage of the total team salary cap is 20.1%, which seriously limited the team's ability to sign other players.

You would have thought that they would have learned their lesson with the Herschel Walker trade.

Carlos said:
You would have thought that they would have learned their lesson with the Herschel Walker trade.
Click to expand...

Over 30 years ago, different Vikings owners, and Mike Lynn was the GM.

Very interesting day in MN Vikings land. Several of the unrestricted free agents, who asked not to be identified, said if Spielman and Zimmer were back next year, they would sign elsewhere. Eric Kendricks, Vikings' Pro Bowl middle linebacker said Zimmer/Spielman cultivated a culture of fear. ESPN reporter Courtney Cronin, who covers the Vikings, said that several players confided that they thought Zimmer was totally out of touch with the players; that he was completely distant and cared nothing about the team members as human beings, only as players. Zimmer didn't get his first head coaching job until he was 57-years-old. I'd guess that his distant personality had much to do with that.
He was a brilliant defensive coordinator years ago, but didn't change with changes in the game. Zimmer is owed $30 million on his contract, so he won't starve.

Also reported was that the Wilf brothers, Vikings' owners, hadn't planned on terminating GM Spielman until late Sunday after speaking to many players following the Vikings-Bears game. Apparently, many spoke about the negative level of communication that Spielman had with players and that he would not take suggestions about team needs.
From Wednesday's Mpls-Star Tribune:

Vikings' all-pro offensive tackle Brian O'Neill and linebacker Eric Kendricks, suggested the Vikings could benefit from a coach who could connect with players. Zimmer, known for his skills as a schemer and play-caller on defense, would light up practices with a string of expletives, and though some players appreciated his candor, his sharpest public critiques — such as when he called the team "soft" after the Vikings lost their first game following a 5-0 start in 2016 — didn't go over well in the locker room.

"I think from an overall standpoint, a culture where communication is put at the forefront [would help]," said Kendricks, who played seven seasons for Zimmer and was named an All-Pro in 2019.

"No matter what your role is on the staff, [it's] you having a voice and being able to communicate things that you think could help facilitate wins. I think just having that voice, no matter how big your role is, is important, to listen up and take each other's feelings into account. I don't think the fear-based organization is the way to go."
Last edited: Jan 11, 2022

It's a team sport. Everyone including the support staff needs to play their part. And they all need to feel like part of the team.

Apparently, there were some "racial" issues, as well. During a radio interview, an African American Viking in his 30s and a long time NFL veteran, was asked how he felt about Zimmer describing him as a skilled player and a good kid. The player responded, "I appreciate it that Coach Zimmer thinks of me as a skilled player, but kid is too close to boy and I'm a grown man with a wife and children of my own."

In the aftermath of the terminations, Spielman is publicly displaying what a complete jerk he's always been. He's basically thrown Zimmer under the proverbial bus, taking no responsibility for the ridiculous expenditure made for Kirk Cousins, when it's pretty clear that Zimmer was opposed to that signing. On two national radio/TV shows, Spielman has said that his former team (Vikings) were in need of a head coach who has a offense minded outlook, and can effectively communicate with the team quarterback. He's basically ripping Zimmer, who prior to being the Vikings head coach, was always a coach on defense. It's come out in the media that during the last three months of Spielman/Zimmer, Spielman never spoke to Zimmer. Obviously, Zimmer knew that he was "done" long before the actual termination.
I'd be very surprised to see Spielman or Zimmer hired for positions similar to those they had in MN. Zimmer could be hired as a defensive coordinator, but he's still owed $15 million a year for two more years on his Vikings contract. I assume that if he takes a coordinator job with another team, he'll forfeit what he's owed by the Vikings. If he waits two years before seeking another job, he'll be 67-years-old and an artifact.

Spielman and ownership, as of today, are blaming Zimmer for the team's lack of success during the prior seasons. Up until now, ownership, the Wilf family, had been quiet but now they're taking shots at Zimmer, as well. What a load of dookie! Spielman drafted, traded, and signed players. He put together a roster that was not a winner, regardless of who coached.
I'm sure the Wilfs aren't happy about paying Zimmer for the next two years. I doubt that Zimmer will coach again. He's made a bundle of money, has a huge Kentucky farm, and has a brilliant and beautiful girlfriend 25 years younger than him. Katarina Miketin on the right. 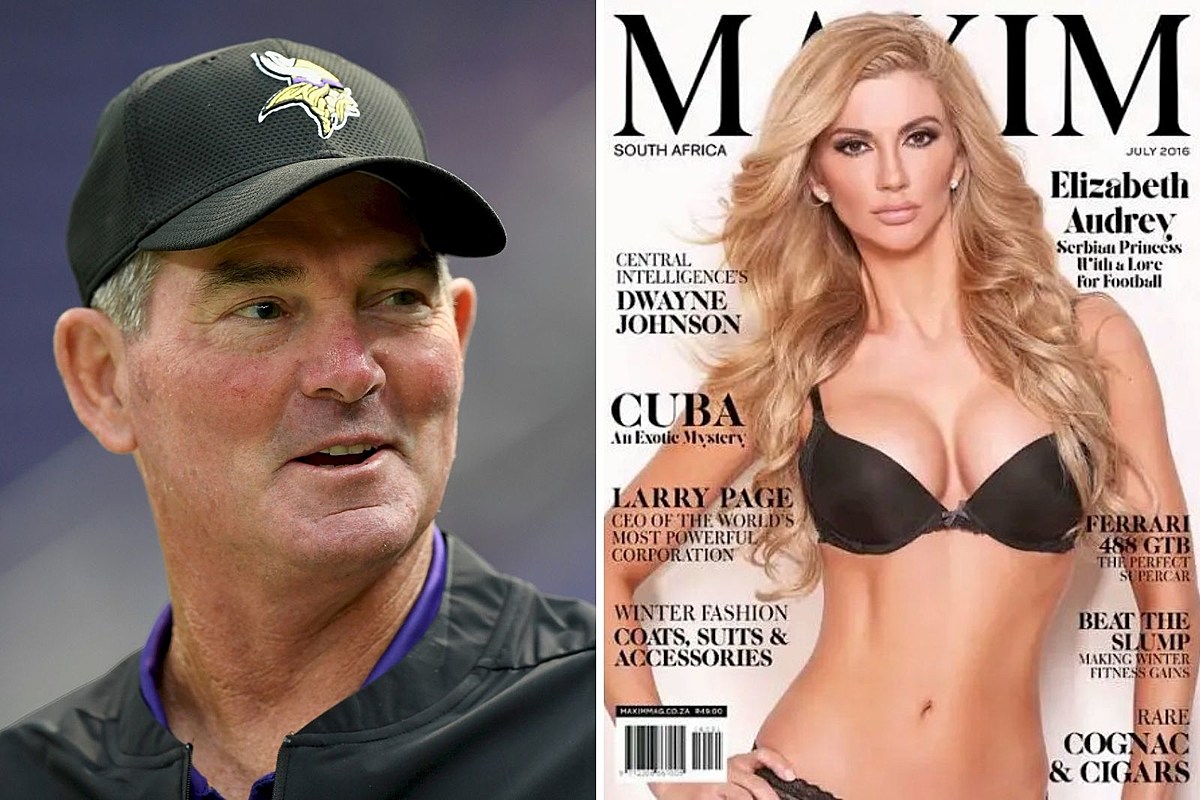