Anyone have any experience with WDC pipes? Any opinions? They seem to be an old NYC company. Thanks.~Eric

They were the biggest pipe company in the world at one time. Whenever I go to flea markets and antique shops at least one turns up to confirm this fact. They were a simple factory made pipe. No bells and whistles and no great grain. I've smoked a couple of them with mixed results.If I were looking for a quality inexpensive pipe I'd go with a Stanwell or Peterson....

Great old pipe company that was in it's prime in the early to mid 20th century and eventually was bought out by S. M. Frank (Kaywoodie). Probably most famous for the Wellington. I have owned several of them and they all smoked good. I have one that dates to approximately 1909 and one that could be even earlier that is in unsmoked condition. There are quite a few of them around, unfortunately it is difficult to find one in decent condition.

If you are looking at one and it is in salvageable condition at a cheap price then get if nothing else just to have a piece of American nostalgia.

the demuth tobacco shop is still open and operating here in lancaster pa. they claim to be the oldest tobacco shop in the country, it is a nice shop but geared more toward cigars then pipes.

I have a fair number of WDC's. They run the gamut in terms of smoking and fabrication quality. Their worst efforts were akin to those Chinese junkers you see offered for a few bucks and about twice that much in shipping on eBay; their best could rival the finest efforts of the best contemporaneous English makers.

This is as you might expect with what used to be the world's largest pipe maker who was in business for many decades.

Here are some "for instances":

1. I have a couple of their "theme" pipes, mass-produced for non- or casual pipe smokers. One is a 1927 apple sort of affair, carve-blasted with a crude approximation of an "aeroplane" and bearing the inscription "Lindbergh, May 10, 1927." Another, from 1937, is vaguely Dublin shaped and bears an eagle and shield design. Both are small and made of indifferent quality briar. I'm smoking them a lot in an effort to flog them into being some kind of acceptable smokers. Neither had been smoked much when they were new.

2. By contrast, I have a sterling-banded yacht "Windsor" from the 1920's. It came to me heavily used and really ugly, but with a thorough spiffing job, I wound up with a beautiful pipe (birdseye sides and cross-grain front and back, no fills or pits) that smokes wonderfully. After I scrubbed the decades' worth of gradoo off the outside of the bowl, it buffed up to a fine luster on a new wool wheel: the original carnauba wax had survived! The stem came superficially oxidized, but cleaned up easily and is of the same quality vulcanite as what's on my 1925 Dunhill shell.

I also have a cased "Triangle" yacht with a deep red bakelite stem from the 1930's. It too had seen many pipefuls but had been decently cared for and was a simple matter to restore to smoking condition.

Both of these are lovely smokers which compare favorably with my 1937-or-before GBD Xtra or my 1921 Ben Wade Leeds apple. They're different from their contemporary English pipes, but it's more a matter of personality than innate quality.

Finally, I have an amber-stemmed, gold-plated brass-trimmed bulldog from the 1890's that's out getting a replacement stem. I have high hopes for this one: I've never seen such tight, straight, perfectly aligned flame grain on a bulldog of any manufacture or age. With a new stem and the smoke-path opened up, it looks like a natural for Squadron Leader and other mixtures of that ilk.

It's unfortunate that they didn't seem to mark grades or line names on about 98% of their pipes, and they weren't consistent even when the did do this. But there are some things to look for for a quality WDC of almost any period:

1. Fancy stamped brass or gold-plated brass on rim or ring. This treatment seemed to have been reserved for their best.

3. A sterling silver or silver-plated original band on a bowl with no pits or fills.

There is one peculiarity of older WDC's, before about 1940 (exception: the Wellingtons), and that is the small-diameter smoke path. You'll need a long drill bit on a handle to carefully ream out the smoke path in both shank and stem.

But, following these guidelines, you may well be able to find a quality WDC of ancient vintage that will give you a most satisfying smoking experience as well as being a nifty piece of Americana.

Thanks for that bit of WDC history!
L

I've got two 10" Wellingtons that smoke cool and sweet through those elongated stems.
They come up on eBay from time to time, and are not expensive at all, generally not topping about $35.
Worth a try, if you haven't got one.
O

Thanks for all the great info. I recall owning a Wellington early on in my pipe career and not doing so well with it as a noob. Maybe I'll revisit them down the road.~Eric

Never done the WDC W'tons; I do own a few of the early briars (some with the gold metal work) with real amber stems. I like the hell out of them!! They smoke very well. I also have one WDC long-shank tapered bulldog with a bone stem. The finish has worn off the pipe over the years; but I keep it waxed and it smokes just great!! The Royal Demuths can be a very good buy; just don't see too many of them. FTRPLT

This is an unsmoked WDC "Van Dyke" Cavalier. It came without a silver spigot stem, so I cut an "era-correct" vulcanite bit with single hole button. It will remain unsmoked and hopefully I will find a proper spigot bit for it. Pretty cool, huh?

Does anyone know how to date US silver hallmarks?

Really cool. :cyclops: My eye is bulging popping out of my head in wonder.

I own only 1-another eBAY venture. But I stuck it in a drawer to forget, (don't like to toss anything out) because it is 1 of the hottest smoking pipes I own & yeah grain ain't too great. Earl

Great pipe in fine condition. Superb work making the extension bit. I wonder if they referred to this cavalier as a reading pipe? similar to a Dunhill reading pipe which has two stems, one long and one short and also silver spigots.
Thanks for sharing the photo of this superb WDC

Ok, we dug up this pipe in our backyard, I thought it looks like its made out of bone, or an antler or something, my dad thinks its made of clay. It says on the stem what looks like 122 W. Demuth & Comp, and on the opposite side, it says REAL WOODSTOCK PIPE. If this sounds even vaguely familiar, I'll take pictures of it somehow, and post them. Thanks for any input.

Matius":v1jp8lq1 said:
Ok, we dug up this pipe in our backyard, I thought it looks like its made out of bone, or an antler or something, my dad thinks its made of clay. It says on the stem what looks like 122 W. Demuth & Comp, and on the opposite side, it says REAL WOODSTOCK PIPE. If this sounds even vaguely familiar, I'll take pictures of it somehow, and post them. Thanks for any input.
Click to expand...

I would love to see the photos of it Matius!

I have a half dozen Wellingtons and all are good smokers, many of them excellent. The smooths, for some reason seem to smoke a little better than the rusticated.

The biggest problem I see with these pipes is the thin, low quality banding they used, as many of the pipes you find exhibit pitted or disintegrating metal.

If you like full bent pipes and don't mind the extra effort required to keep the mortise area clean, with a little patience,you will find many of these pipes in good condition for sale at reasonable prices.

I believe it is a filter model from the 1940s. I think the stem is amber (smell tested for bakelite). There is gold or gold plate on the stem marked with small Roman numerals XXXVII which is apparently of some significance. Does anyone happen to know the exact model of the pipe or have any other info about it? WDC information is relatively difficult to come by and I am a pipe newbie. Input would be muchly appreciated.

Upon further research I believe the model must be a gold dot. 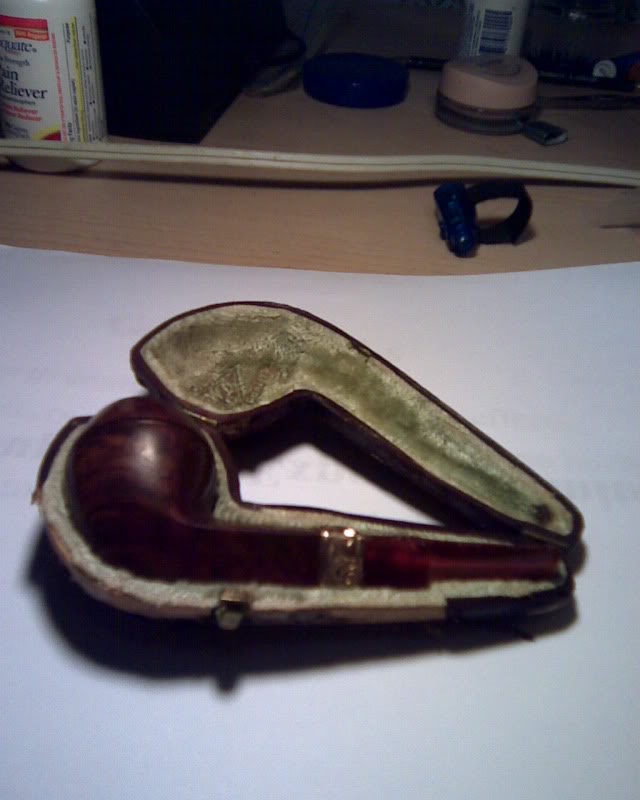 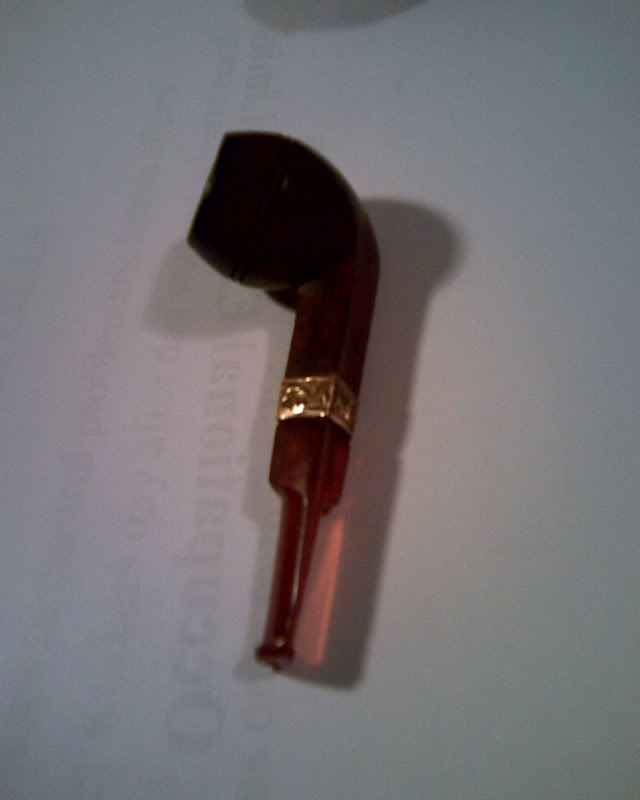 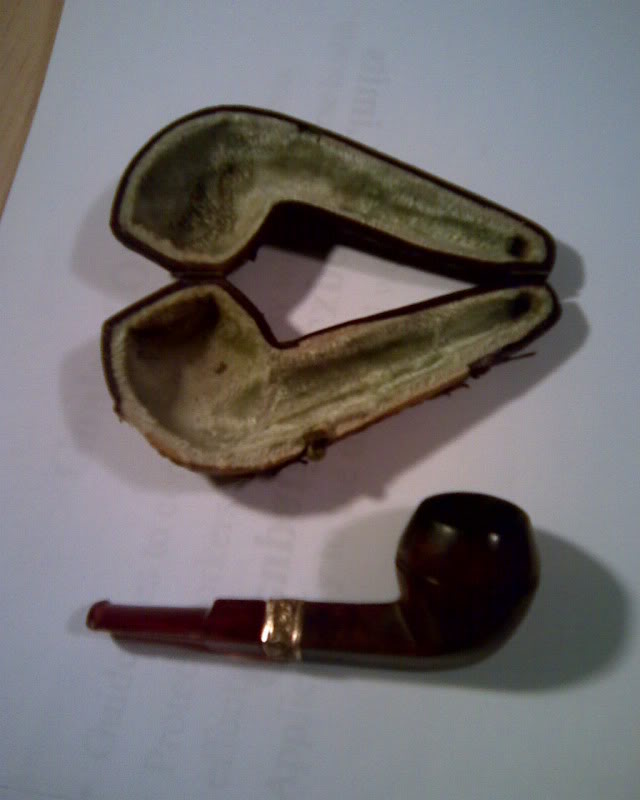 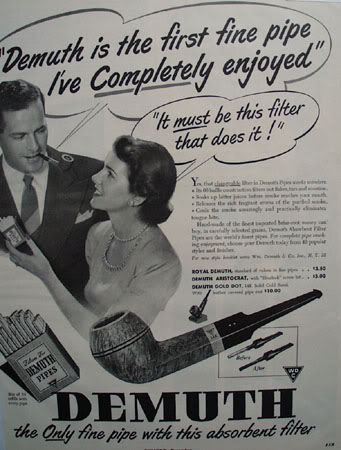 Pipe sighting in Netflix "Anne with an E"