What are your dinosaurs?

Are toy guns still made? With rolls of "caps"? And does anyone remember "greenie stick-m caps"?

The roll caps were great when baseball bat was stalled down (on end) on a roll. Like a firecracker...

Fazby":et7rhdiv said:
Are toy guns still made?  With rolls of "caps"?  And does anyone remember "greenie stick-m caps"?

The roll caps were great when baseball bat was stalled down (on end) on a roll.  Like a firecracker...
Click to expand...

Ozark Wizard":od3uonqy said:
Cursive writing. And the patience to wait for posted corresponding. For that matter, having to wait to call someone until they MIGHT be home.
Click to expand...

I make a list for each day, alternating between cursive and a font that resembles Voi Vod Away's style (check their album liner notes). I've meant to make it a font so I could use it on the computer, but it's a lot of work without a writer screen. I definitely miss seeing some cursive, but I also don't miss trying to decipher the mess that is some people's writing.

They'd have to still offer them in order for anyone to take them. I don't know many schools budgeted for the trades...but I'll be goddamned if they made any cuts in their athletic programs. We always got our priorities spot-on.

Which I would guess a fair amount contributes to men (especially older men with a strict idea of gender roles) not feeling planning, shopping, cooking, and cleaning up meals is real work. Which baffles me. And before dishwashers? Being tethered to a kitchen for a couple hours, 2-3 times a day during the week and 3 times a day on the weekend isn't labor? I like to cook. Would I think it all that enjoyable, and not a downright job, if I had to do it every day, hours per day? Reasonably considering, I doubt it. Add on all the complaints and whining on top of it? My goodness...what in the heck were men thinking when they didn't consider running a household a full-time job?

I miss a lot of what was said before me. Most of all, I miss my good health.

Corncobcon":x47gdnud said:
I miss a lot of what was said before me.  Most of all, I miss my good health.
Click to expand...

good health are you doin ok??

Corncobcon":nzyao9zy said:
I miss a lot of what was said before me.  Most of all, I miss my good health.
Click to expand...

good health are you doin ok??
Click to expand...

Yeah, I'm ok. Thanks for asking. It's just the aches and pains, arthritis, blood pressure problems, etc. My mind thinks I'm still in my 30's, but the body won't respond the way it used to.

Yeah, I'm ok.  Thanks for asking.  It's just the aches and pains, arthritis, blood pressure problems, etc.  My mind thinks I'm still in my 30's, but the body won't respond the way it used to. [/quote]

Welcome to your "Senior" years As Betty Davis said on Johnny Carson one night many years ago..."Old age is no place for a sissy!" :cheers: FTRPLT (age 73!!)

Yeah, I'm ok.  Thanks for asking.  It's just the aches and pains, arthritis, blood pressure problems, etc.  My mind thinks I'm still in my 30's, but the body won't respond the way it used to.
Click to expand...

Welcome to your "Senior" years As Betty Davis said on Johnny Carson one night many years ago..."Old age is no place for a sissy!" :cheers: FTRPLT (age 73!!)
Click to expand...

'Everyone hopes to reach old age, but when it comes, most of us complain about it.' -- Cicero

The only thing I miss about youth is the ability to eat without consequences.

I remember riding on trolly cars and street cars around Portland and Oregon City.  I remember visuals...sun through window glass, dust motes, tattered leather seats.  And I remember smells...grease, electrical stuff, people crowded together, dust.  Funny how those things hang in there. 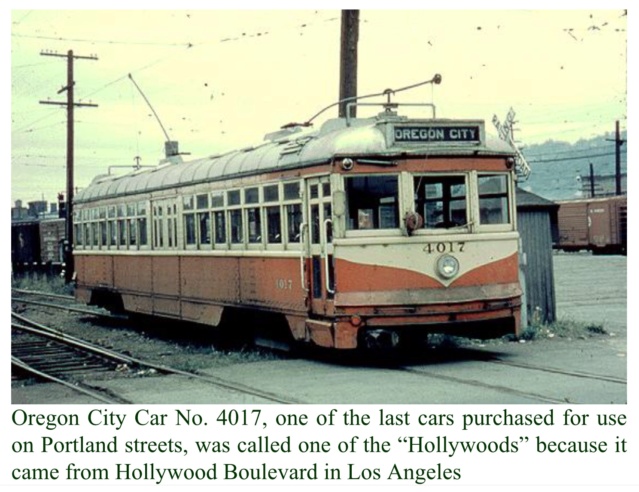 Bikes, as in bicycles.

Got my first one around 4 years old. A trike naturally which I rode around our basement. I don't remember this, but the folks said they had to push on my legs one at a time to get me to realize you had to "pump" as they called it. Guess I was just un-cordinated.

A year or so later I graduated to a 2-wheeler with training wheels. The first ride without them was plenty scary but I did OK - except when I stopped and had to get back on and set off on my own. That was shaky but I didn't fall over. Recall finding a curb to get back on.

Age 10 or so I inherited the Huffy fat tire cruiser from my cousin. It was a large bike, very heavy, one speed. OK on level surfaces but killer on uphill grades. Including and especially for a 10-yr old. I struggled with it.

Few yrs later the folks bought me a shiny new Schwinn 3-speed. Now we're talkin! Relatively light and the 3 speeds were all I needed. Rode that all the way until I was old enough to get my driver's license. Maintained it myself too, but frankly it didn't really need much maintenance.

Somewhere along the way 12-speeds became the new thing. Never could understand why anyone would want 12-speeds when 3 did just fine. Plus I hated the seating position and handlebars on the 12-speeds I tried.

I retained the Schwinn for a while after HS and rode it occasionally around the area I was now living. But a car was better, faster, and easier. Must have sold it but don't remember.

Years after that my Pap got a 12-speed with his new car purchase. He gave the 12-speed to me and I tried to like it, but again the seat and the handlebar position proved much to uncomfortable. That didn't last too long.

Now that I'm retired I've thought about getting in a 3-wheel recumbent bike. The one that I tried out was a nice one. It had a comfortable seat with back support, one wheel in front and 2 in back. Lightweight and maneuverable. Problem was the price, which after the necessary add-on's brought it up to around $1500. And while that amount may not be a deal breaker to some, now that I'm on a fixed income I need to look at that kind of expenditure carefully and weigh out how much I would actually use it. Right now it's been put on the back burner.

Brewdude":ny60h2oc said:
Bikes, as in bicycles.
Click to expand...

Love me bicycles. I grew up in a farm town, on the very edge of the city proper. We would ride our bikes into downtown several times a day. Buy penny candies and baseball cards and trade them on the front stoop of the store. Bicycles were key to our existence. And then we had an old crabby eccentric codger who fixed bikes out of his garage. When I got older, I learned he wasn't really all that eccentric, but he was a Europhile. He and his wife were always riding bikes or riding their tandem, which was part of his thing for Europe. In berets. You don't see berets in a farm town. I then got hooked on touring and racing because the Tour de France was televised. I'm still bit by the bicycle bug. I don't ride as much as I once did, but I used to ride country roads and used the bicycle as my main form of transportation. Still prefer it over a car, but the way we design our cities doesn't make it very convenient to actually live via bicycle. Also makes it downright dangerous in bigger cities.

Some people dream of owning certain cars. I have a short list of dream bicycles.

ZM - absolutely. Growing up in suburban/rural Oregon, from the time I could sit the seat our bike was the doorway to freedom. We were released by our foolish parents each morning onto an unsuspecting world. It built independence as well as judgement...and strong legs. There were very few fat kids back then. Wonder why. After I was in the military I went back to school at Portland State and lived downtown. On a fluke I bought a used Italian “racing” bike from a girl whose boyfriend had dumped her...with very high grade Campagnolo shifters and related hardware. Got it for a song. That thing flew around the downtown core like a Lamborghini for years...rock solid. Loved that bike.

"What Do You Need a Vehicle Like That For?"