What tea did you have this morning...or afternoon?

A small pot of Barry's Gold Blend this morning

Brewdude said:
Tim, I've heard some claim the use of tea bags rather than whole leaf reduced the overall degree of flavor. And while it's equally possible for the whole leaf brewer to add a bit more while measuring rather that the set amount in a bag, what are your views in general?

Thanks BD, I dunno about bags reducing flavour, I leave the bag in for the entire cup, emulating leaving the leaves in a teapot the entire time and normally that's good for me. The foiled EG was far milder than the other two versions that I've tried.

Timbo said:
Thanks BD, I dunno about bags reducing flavour, I leave the bag in for the entire cup, emulating leaving the leaves in a teapot the entire time and normally that's good for me. The foiled EG was far milder than the other two versions that I've tried.
Click to expand...

Consider...that a teabag has X amount of tea in it. It’s always going to have X, never more, never less. But YOU control the amount of tea in a loose tea brew. More...less...lighter...stronger...whatever. That’s No. 1. Then, No. 2...some claim that a company might use a finer tea (fannings vs CTC) in a bag vs what the same company will provide in the loose leaf they sell. Most companies deny that charge. That centers on the thought that finer tea produces a stronger result in the cup. This via more surface area exposed to the fresh boiling water. This surface area thing also comes into play for our No. 3 which looks at the thought on brewing loose leaf in a pot, then pouring the tea into a cup through a mesh strainer. The claim is that the freely circulating leaves are more exposed to the boiling water which provides better extraction. My reaction = “whatever”. It’s interesting that some major companies ONLY sell tea in bags...even in Ireland/Scotland/England which is “tea central” as far as it being a part of the general culture. BTW: Ireland is the number one country in the world for tea consumed per capita. Anyway...then factor in the size and shape of the pot...the water (critical) being harder or softer (and several big outfits design their blends for softer vs harder water, a big marketing thing esp. in Scotland which supposedly has softer water)...whether you have your tea with crumpets, cake or biscuits (or all three).

It’s frankly too much to deal with for me. It’s interesting, but I’ll just continue to make it whichever way the wind is blowing at the time and enjoy the result. I mean, we could get into the same kind if discussion re sweetener in tea...loose vs cubes, cane vs beet, white vs turbinado vs honey, real sugar vs Splenda, etc., etc., etc. Then there’s the lemons, the shape and size of the cup, sitting down vs standing up, yadda, yadda, yadda. Then there’s the very real thing about what teas are in the blend or if it’s a single estate...OMG!

This is like announcing that one pipe shop had a shipment of Stonehaven in stock...

Teadogs (the online vendor that guarantees its stock is entirely the actual items and blends sold in the UK) recently got their Miles Teas restocked. Miles is an small old English tea company that consistently wins awards for the few blends it produces. I’ve wanted to try some for quite a while so I just out in an order for their loose leaf (3 bags left) and a box of Smugglers Gold bags. Especially if you’re a tea person that goes for loose leaf you should think about shooting an order in soonest.

Hype: For the last 4 consecutive years, Miles is included in Best Brands magazine top 5 UK Tea & Coffee brands. For 2017, Miles is ranked number 2. This outranks all other UK tea companies. The company was started back in good ol’ 1888. Re: their Smugglers blend...Smugglers Gold is an English Tea. It is smooth and full-bodied. Miles is a regional English Tea company whose tea tasters try each of the tea leaves used to make Smugglers Gold. As as result, you are ensured of high quality tea and the same great taste in every box. Miles Tea rates Smugglers Gold a 4 on the strength scale. It is the company's strongest tea.

You gents are driving me nuts. I want all of it! I just can't make strong enough tea with tea bags and always buy loose leaf, figuring if I make it too strong, I'll add a bit more water. I did just order: Miles West Country Original Loose 8.8Oz. I forgot to check if it was available from Amazon, so shipping was about the same cost as the tea. 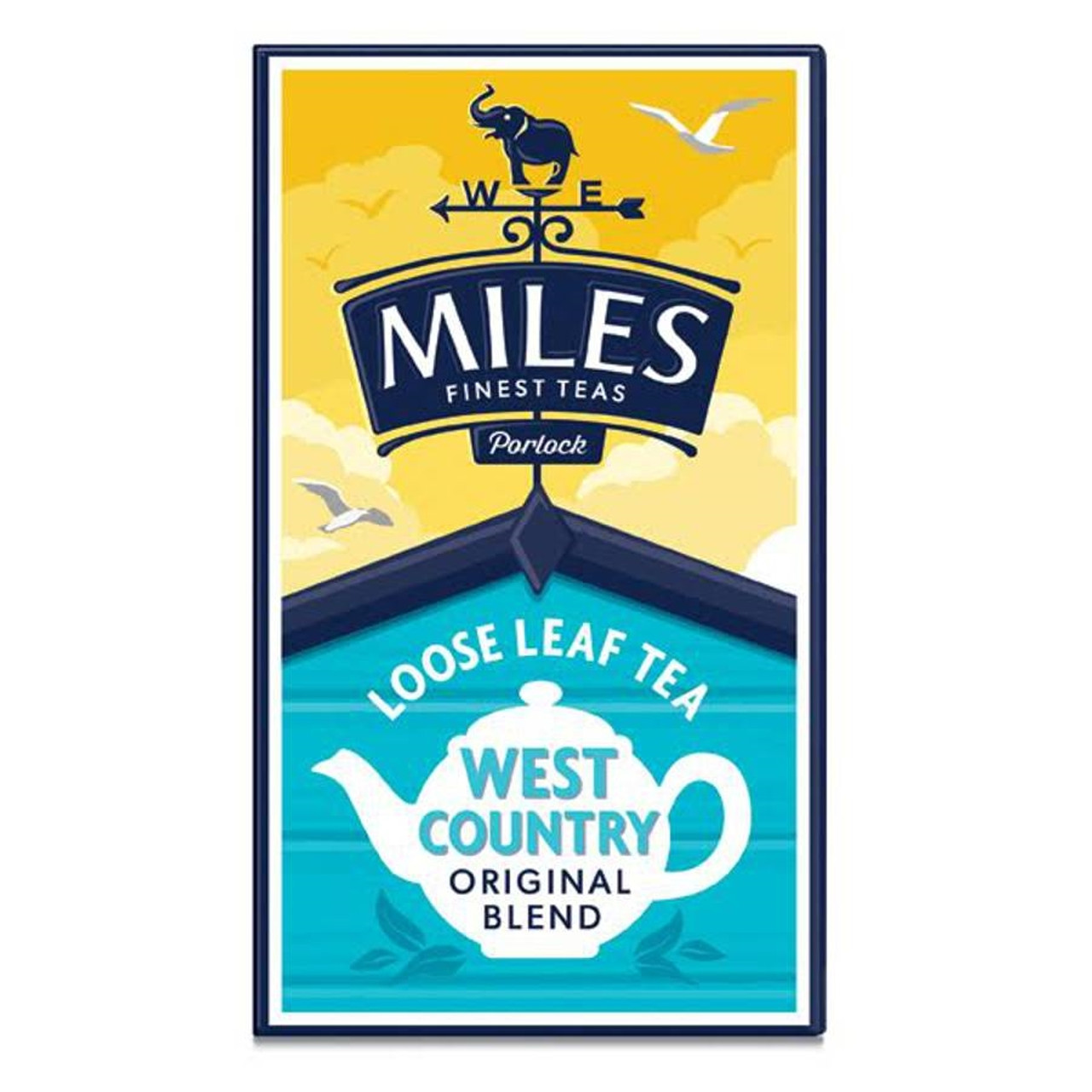 Hope you like the loose Miles. As of now there’s just one box left. It’ll be gone by tonight. Ordering one box and getting charged flat rate postage sucks, I know. They do a thing where you buy $35 of stuff and get a free box of tea. My second order from them I ordered 5 different blends and got got a box of Thompson’s Signature Blend (80 bags) as my bonus. It’s now a favorite.

At some point we all might think about setting up a “Tea Swap” thing. A guy lists teas he has available for swap (3-6 bags) five to ten or so whatever brands. Then someone else does the same thing, posting what THEY have to trade. All teas are to be considered of equal value...so much easier. Then A connects with B and they agree on what each wants and do the trade. The teas must be totally fresh...we should list the box stamp date for transparency. Put each set of five bags in its own labeled zip lock...everything into a padded envelope and into the mail it goes. Just a thought.

I’m due for my second Covid shot this Saturday so a few weeks after that I’ll be ready for the post office or the ups store.
G 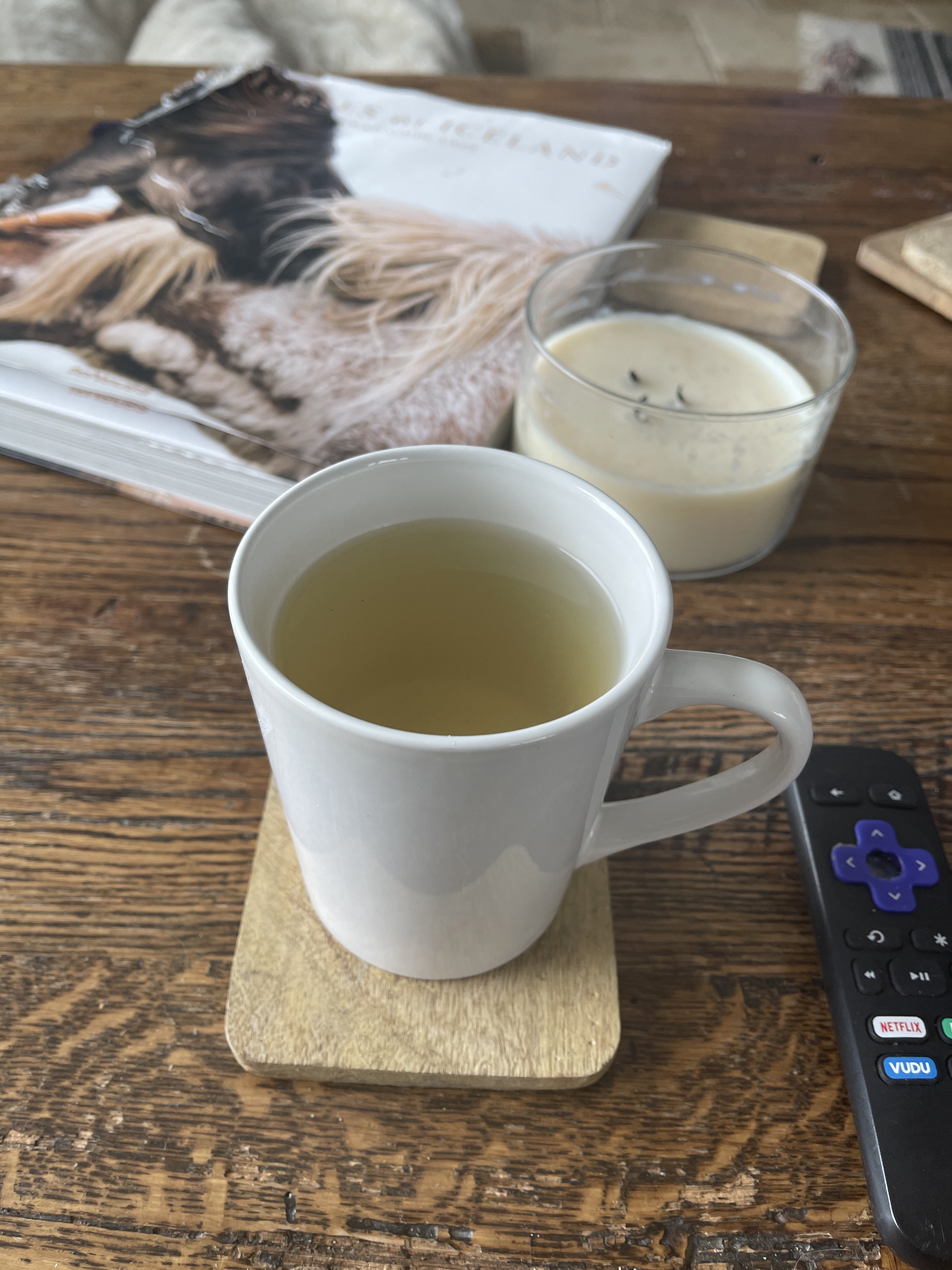 That. Is why god made coffee

Iaido said:
That. Is why god made coffee

This morning I brewed a big mug of Thompson’s Scottish Blend. Designed specifically for Scotland’s soft water. I discovered a box while rummaging in my “tea chest”. Don’t know how it got buried out of sight. I was very impressed in how much I like it...very brisk in my water. Thus far I have really enjoyed every Thompson’s blend I’ve tried...except the Decaffeinated, which was kind of cardboardy. This includes the Irish Breakfast, Punjana, Signature & Scottish Blend. I was so imoressed I went ahead and ordered one I’ve been eying for some time...their Punjana Titanic Tea. It’s hawked as an homage to the workers that built the Titanic 100 years ago in Belfast...home town tor Thompson Family Teas. So now the FINAL FOUR are:

Wow. I might have to call Thompson’s Family Teas as my desert island tea company. Just did up a big mug of their Titanic Tea (also referred to as Punjana Titanic) and it’s just a good as their other excellent blends. The strength is a bit less than some of their others, not a huge aroma but the flavor is very satisfying for an afternoon blend. Another winner from Thompson’s! Outrageous!
G

Organic Dragon Well (silk road teas). It is finally warming up here in Jackson Wyoming. It is always a long winter here
G 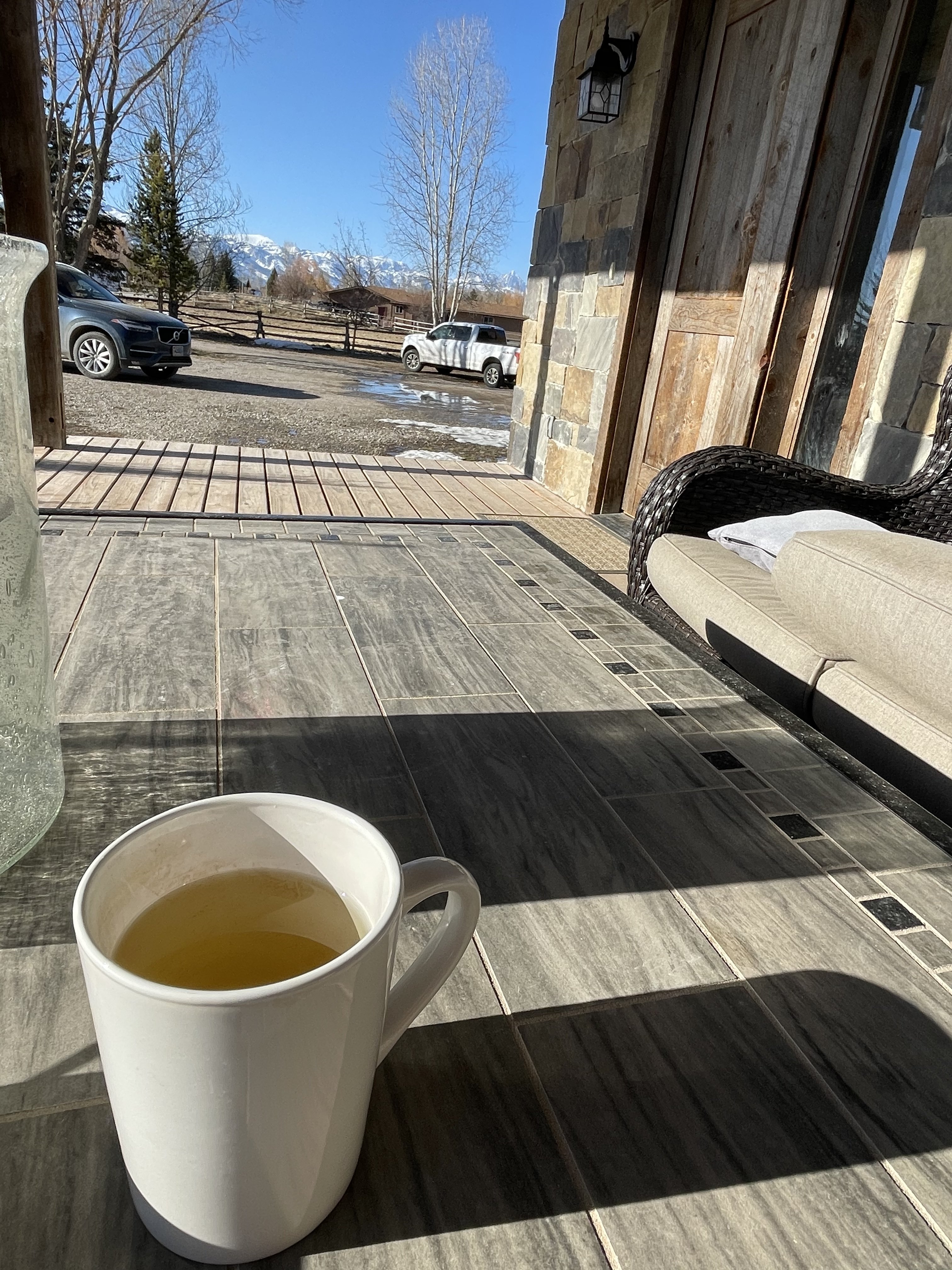 The view from my porch 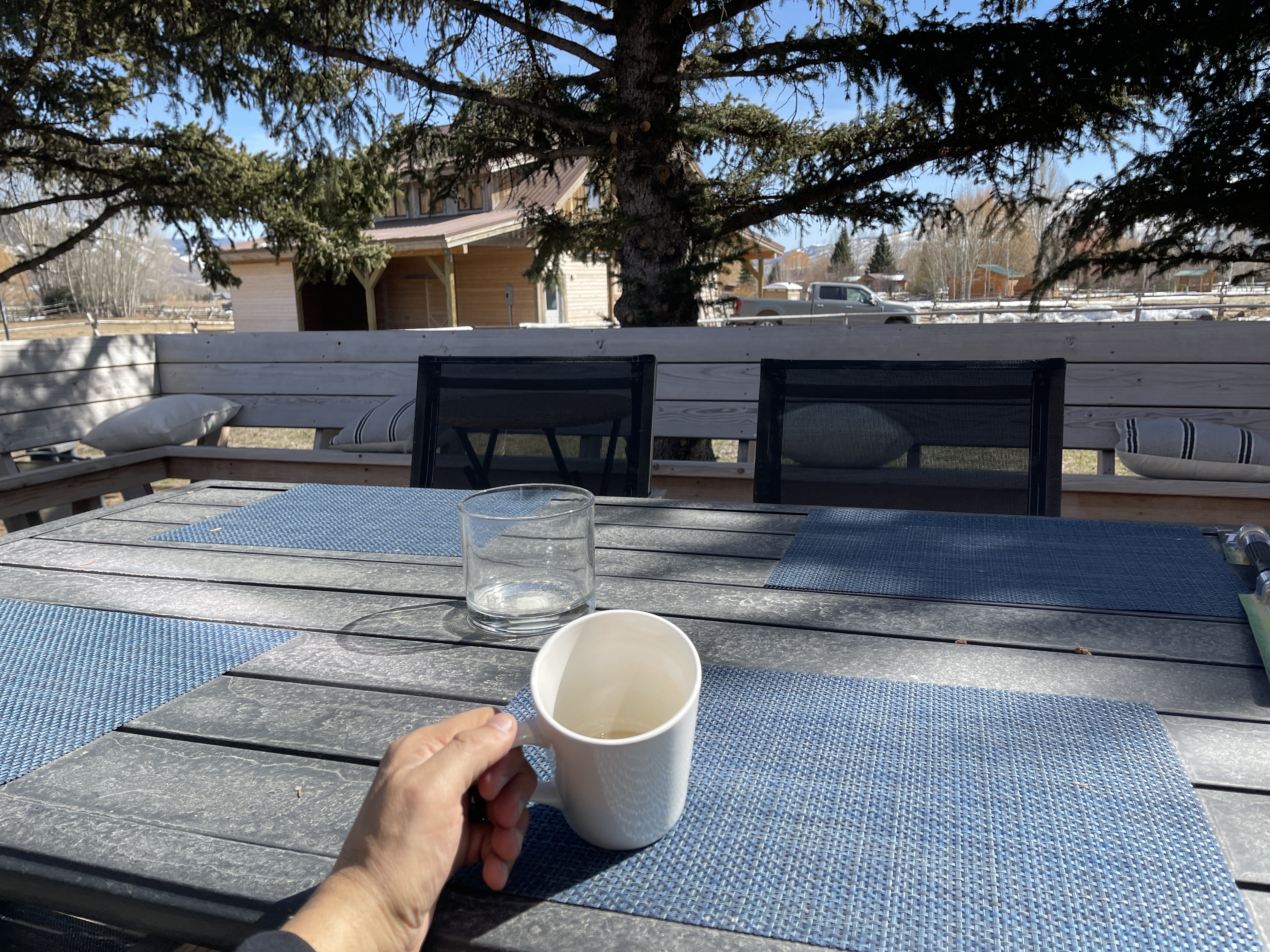 Developing your own home blend