A person trapped in a stone vulva

Man gets stuck in a vagina: Student brings new meaning to the phrase 'born again'

He got stuck inside a giant stone vagina outside the microbiology and virology department of a university in Germany.

The unnamed man got into the statue as a prank but ended up having to be freed by a team of 22 firefighters.

Their log of the incident says simply: "A person trapped in a stone vulva."

A friend posted the image of him online saying: "I was there!!! He just wanted to take a funny picture.

"The fire department was not really amused, and he was really embarrassed."

It is believed that he climbed into the sculpture but then slipped down the opening and got his legs stuck in a narrower part.

Thankfully there was no damage to the €120,000 (£95,000) vagina outside Tübingen University and the red-faced student was not injured.

The sculpture was created by Fernando de la Jara and is named "Chacan" which means making love in the Peruvian Indian language.
Click to expand...


There's no truth to the rumor that firefighters used KY Jelly to rescue the little dick.   :lol!: 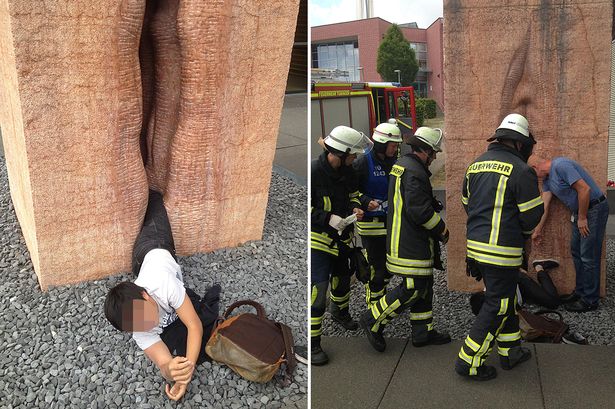 Hope they send him a bill for the firefighters time!

At least it wasn't the sculpture near the proctology department. . . .

I have SOOO many comments,,,,none of them appropriate to post here.

What a sticky situation.

He really stepped in it that time.

Bet his lips are sealed on this one.

It's a metaphor for mankind in general.
A

While I'm here, squeezing between rocks is some kind of sport, tho if it has a name it is not known to me. People getting stuck like this is fairly common. Vagina sculptures? Not so common. It did remind me of this tho https://www.youtube.com/watch?v=W0l20n_KJvo

Well thank goodness it was a large sculpture, no telling what he might have got stuck in it if it were smaller.

I thought I was going to see a picture of Madonna and her boyfriend!

And this is newsworthy because?

Brewdude":3144l3f8 said:
And this is newsworthy because?

Although I forget the exact quote, as Benjamin Day (a NY newspaper editor of 1840s) pointed out, sex and violence sell the news

Brewdude":q6utwzqc said:
And this is newsworthy because?

Although I forget the exact quote, as Benjamin Day (a NY newspaper editor of 1840s) pointed out, sex and violence sell the news
Click to expand...

Life at the Kia dealer

The Story of Life.
2