I have decided to give an official update on what has been going on in my life the past year or so. I have dropped some info in passing in a few threads but have yet to give the full story the space it deserves. Before that though, here is a disclaimer: there will be some religious and spiritual elements found below; however, I am not attempting to preach anything, but instead to just show where I have been and why.

I suppose about a year and half or so ago I began to auction and sell off the majority of my pipe collection and tobacco cellar, some of which many of you had the pleasure of reaping the benefits of my time in need. I must admit some of those sells I regret, particularly those that involved some cherished pipes and even more cherished tobacco.  Nevertheless, I must equally admit that without the funds raised from such sells my wife and I would have been in a far worse condition than we found ourselves when we finally arrived to our new, albeit temporary, home.

With that said, after I went on a selling spree, I found myself in a hiatus of sorts from BoB. Mind you, this was anything but intentional.  During this time, I was traveling and raising support for an upcoming trip to Kenya in order see my, then, girlfriend and propose, unbeknownst to her, all the while trying my damnedest not to fall behind in my studies (which I did not, GPA still is intact for potential PhD opportunities). During this trip, I would meet with a potential associate and begin discussing plans for the upcoming year. Thus BoB, unfortunately, went unattended for a time. I would still check in and read but I did not post for reasons I am unsure of at this juncture.

After the trip, funded by supporters and my savings, we (Alli and I) began to make preparations for planning a wedding. It was quite difficult though, seeing as she was in Kenya and I in Kentucky. So, I buckled down and tried my hardest, with the immense help of her family, to give Alli the wedding she didn't want (she would have preferred to be wed in a courthouse with parents and that's it).

Moving forward, we were officially married on June 29, 2013. In the months between January and May, I was left with the task of continuing my Masters' degree, raising support for the both of us whilst in Kenya, and selling everything I own, including my car.  My wife was and is a local high school teacher (a missionary teacher) outside of Nairobi that requires 50% self-funding, and I was going into a job that paid 0 and, thus, required full funding (I will speak more of this below). I worked three jobs, continued school, and wrote more churches than I care to remember. The fact is the majority of funds I raised were my own (from work and pipe/tobacco sales) and a few seminary friends. Every church I spoke to or spoke at was seemingly uninterested (do not take this as a knock, for it is not). The most unfortunate of it all was having 50 verbal commitments from friends and family for monthly support come, with only three being withheld in the end. Such is the life of someone who seeks funding outside of him/herself, which is anything but easy, especially when one has to break the mindset that asking for help means one must be a bum (this horrendous idea pervades the Church as a whole---another issue for another time).

So, we were wed last June and spent the final month of July with our family and friends as we, or I rather, prepared to uproot from the U S of A to Kenya.  Alli and I have been blessed (for lack of a better word) along the way.  We were given a trip to Rome for a honeymoon prior to our arrival in Nairobi. Not to mention, Alli's parents gifted us a trip to the Holy Land this past Christmas, which was exquisite if I do say so myself. These two trips were wellllllll beyond our means (we ate like locals in both locations and stayed in someone else's apartment).

Anyway, we arrived in Nairobi on July 31, 2013 and proceeded to move into our 1 bedroom, kitchenette/living room servants quarters (a house smaller than most of your guys' shed out back). The money that was raised from selling my pipes and tobacco went to buying our first groceries, kitchen table, and stove. I began work the following Sunday, which brings me to what I now do. I was requested to pastor a local church in a small town outside of Nairobi full of Kenyan youths. In accepting this appointment, it was my hope that I would offer assistance in any way I could by teaching them.

It is no mystery that the majority of pastors within East Africa are not able to seek formal education, so this is what I wanted to attempt to give. However, as I have said, they needed a pastor more than a teacher it seems.  The former pastor had left the country quickly without a word and the associate pastor passed away from HIV. So this little congregation of 15, 95% of them being women, were left without a leader. With that said, instead of teaching clergy, I began to teach parishioners week in and week out for free. Instead of preaching loudly at them, which is a common occurrence in the culture, I approached them in their own situation to teach them. Since then, I have been closely discipling the few members I have, hoping they will see the power and relevance that is found within Christ. My wife and I in our short time here thus far (about 9 months) have helped see three of our younger ladies off to university, all of which come from families that are relatively poor ($10-25$ per day income).

Apart from the joy my wife and I both get from our teaching and ministering, it has been anything but easy.  We have had supporter after supporter drop out for various financial reasons. Not to mention, the verbal commitments that did not come through in the beginning.  It has been rough on us at times, but this is what we chose to do and with that we are content. We have enough to cover our heads and not hunger and thirst.  In the end, that is all that truly matters. How do we have internet? Well, we stay on someone else's compound whom allows us to use their internet; without them, you would never see me on here.

Anyway, some of you have asked and there it is in condensed format. I tried my best to leave out some things, as this is a pipe forum with various personalities that may take offense.

Oh! A picture of my bride, me, friend Jeremy, and his wife Nancy (in that order). 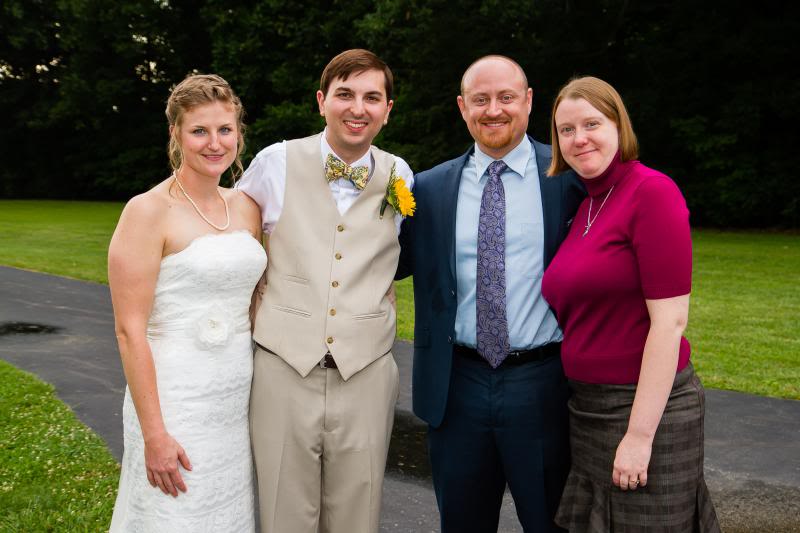 joshoowah, You surely have had some ups, downs and experiences to remember for a life time. You've seem to have done some things in your young life that many of us may never be able to. You have a lot ahead of you still and I hope the road gets smoother for both you and your wife soon. I can't think of a better set of word's to explain what has happen to you and your wife other then "You've been truly Blessed!". And you understand that what is wanted in life isn't always needed and without getting too sappy about it, you've found the only thing you need. And congratulations on getting married sir, I wish the best for both of ya.

Congratulations on the marriage! Your story reminds me of two of my favorite quotes:

The first quote I heard today for the first time but it instantly became my #1 favorite quote: "Happiness is love. Full stop.”- George Vaillant. So simple yet the truest statement I have ever heard.

The second quote is one I try to remember when I am dealing with life's challenges: "We may encounter many defeats but we must not be defeated. In fact it may be necessary to encounter defeats so we may know who the hell we are... what can we overcome...what makes us stumble and fall...and somehow miraculously rise and go on." - Maya Angelou.

You have obviously overcome a lot to get to where you are now and have no doubt learned much about what you can achieve. You are unbelievably blessed to have passion for your work and a beautiful wife to share your life with. Congrats and best wishes for the future!

joshoowah":ogu9hen3 said:
With that said, instead of teaching clergy, I began to teach parishioners week in and week out for free. Instead of preaching loudly at them, which is a common occurrence in the culture, I approached them in their own situation to teach them. Since then, I have been closely discipling the few members I have, hoping they will see the power and relevance that is found within Christ. My wife and I in our short time here thus far (about 9 months) have helped see three of our younger ladies off to university, all of which come from families that are relatively poor ($10-25$ per day income).
Click to expand...

You meet them where they are and walk with them - the Road to Emmaus.

Awesome story. The world needs more like you. I would love to go to the Holy Land one day myself. Thanks so much fer sharing yer story. And thanks for going out into the world and preaching the gospel. God Bless you and your wife.

God bless you brother. You have sacrificed so much for a greater cause, I really commemorate you on your dedication. :cheers:

I really cannot imagine anyone taking offense at a relatively young man exploring and embracing the life of a Pilgrim.

I applaud you, and wish you well during these wonderful and blessed times you will share with your wife.  It's good to hear you are doing well; and you certainly have my well wishes.

I am not an eloquent man, and I fail to find the proper words to express my admiration of your life choices. Self sacrifice and love and some of the most noble human expressions and you have chosen to express them by these life choices.

Kudos to you, sir. I wish you and your new bride the best.

Good bye to an old friend