I received this sad news from Sherlock Holmes Pipe Club secretary
Nelson Pidgeon today. Donald was one of our first presidents and was a
gentleman of the highest order. A bowl of MacBaren's Navy Flake in a
Kaywoodie prince in his good honor...


I was informed by SHPC member Paul Dunn that Don Powers passed away
yesterday morning.


Don was one of the original members of the Sherlock Holmes Pipe Club
and President of the club for many years. He had close relationships
with
the folks at L.J.Peretti's and Joe at Brookline News in Boston.


I know Don loved the club and it was hard for him to move away and no
longer be able to attend. I spoke with him a few weeks ago and had
planned
to get a small group together to go up to NH and see him. I guess I
thought he
had more time. I guess I was wrong.


Well at least now he'll be able to rub elbows over a bowl of tobacco
with some
of the greatest pipe smokers of our time. It makes the thought of
leaving this earth
a little easier to take I guess.


So let's all smoke a bowl today in his honor. We'll miss you Don.


I don't have any other details at this time. He lived in Salem, NH if
you want to check online tomorrow. 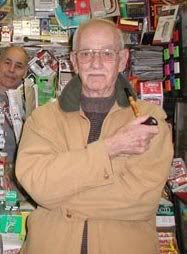 Always sad to hear of the passing of someone dear to our hobby.

My condolences to his family and friends...may he rest in God's arms and watch over those he cares for.

I'll make a point to smoke a pipe in his honor tonight. Sending clouds of smoke to the heavens above...

My thoughts and prayers will be with Don's family as well as you and your club members Dock. These things are sad but just think of the blessing of living a full life that involved many years of service to the SHPC. Being a member of TAPS here in Raleigh, NC, when the older original members can no longer attend meetings and then pass on it is sad so we honor them with the fond memories of times together at meetings and shows.
Share:
Facebook Twitter Reddit Pinterest Tumblr WhatsApp Email Share Link
Top