A new friend recently gifted me several packages of these pipe cleaners. As they’re new on the market (began production a year or two ago?) and I don’t know if they’ve entered the US market yet, thought you guys might like to see the “Cadillac” of pipe cleaners.

They’re made of incredibly soft cotton chenille, and thicker than anything I’ve ever seen, (short of a 12 gauge bore mop!). As you can see from the pix, they start out a bit thicker than the average Dill’s type pipe cleaner, (in the middle for comparison) and are close to three times the thickness at the fat end. The internal wire is also notably stiffer than the average pipe cleaner, so one might need to use caution on stems and shanks with major bends to avoid scratching. 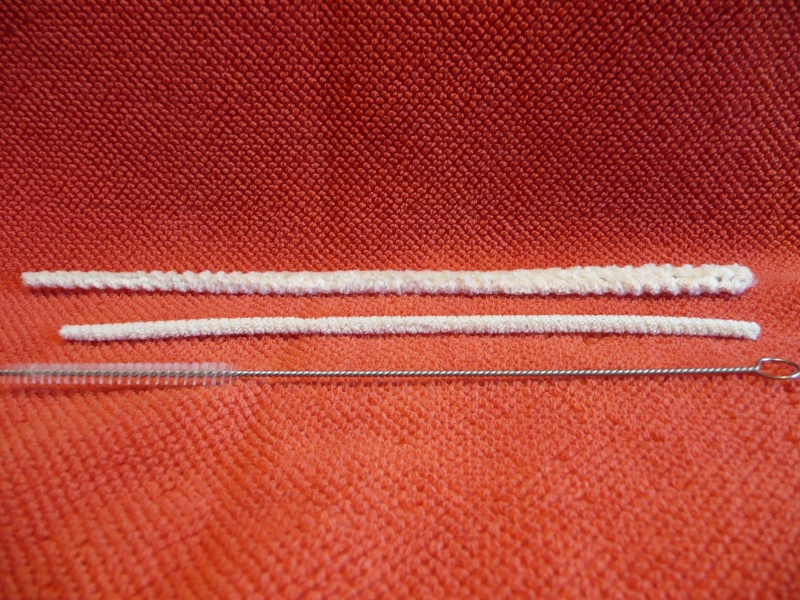 They’re packed in stiff, sealed cardboard containers of 50 and surprise, surprise, when I opened it up; each pack includes a great little bristle brush for major cleaning. Pretty cool all in all. Considering the quality of this product, I’ll bet they would be more expensive than the average. Has anyone seen them at pipe stores in the US or know what they cost? As I don’t know if they’re even imported into the US, it may be a moot point. For my better pipes or for the occasional deep cleaning, I think they’ll work great. 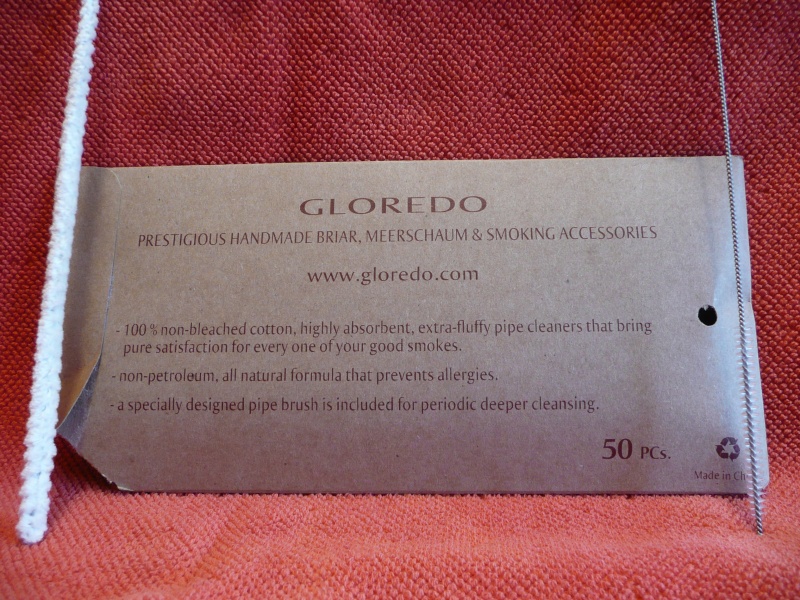 They’re made by the same people that make Gloredo pipes, a rather new, high-end pipe line out of China. I saw several Gloredo pipes at what was probably the finest (i.e. elite, really expensive, high-end, out-of-my-income-bracket!) pipe shop in Shanghai, and they are truly beautiful, hand-made pipes.

Natch (who is excited about upscale pipe cleaners and needs to get a real life!) :mrgreen:

Nice post! I suspect that we're in the "pick-up these cleaners at the entry-into-the-market-price". Sort of like many Chinese products. I have to admit that I've personnal purchased MANY items in this category. May have to check these out!

Buddy Springman":4ikyy7ks said:
Nice post! I suspect that we're in the "pick-up these cleaners at the entry-into-the-market-price". Sort of like many Chinese products. I have to admit that I've personnal purchased MANY items in this category. May have to check these out!

Agreed, I'd like to get my hands on a few packs of these before they become too well known.
H

Neill (ZuluCollector) posted about these on his blog a while back:

The last I heard, the maker was still looking for a US distributor. I wonder what exactly is involved in that?

With BJ Long pipe cleaners (made in USA) available for less than $1 per bundle, I can see no reason to buy pipe cleaners made in China.

I have to agree with you HAGLEY, one of my pet peeves is Chineese products crowding out American goods. The design is interesting however.
H

I wouldn't expect these things to put much of a dent in BJ Long's market. I have no idea what they'll cost if they are ever offered here, but a WAG would be a couple of bucks. There's the brush, and all the super-duper-ness. The couple of people who have tried them and have reported say they're better. Who knows? Maybe Gloredo will unearth a market for super-premium pipe cleaners that BJ Long can take advantage of as well.

I wish these things would go on sale soon. I am tired of having to deal with the sharp twisted ends of the BJ Longs.

Rick Newcombe gave me a pack of these in Chicago at a show to try. They are very good. One of the most irritating things about pipe cleaners for me is the fluff coming off the cleaner, especially, when I dry the pipe during smoking. These cleaners leave some fluff too, but not nearly as bad or as much as other brands I've tried. I have not yet figured out where to buy them and what they cost because I'm lazy and have too many bags of various cleaners in my closet, which I do not intend to donate to anyone (I am greedy too )... So, by the time I may need some more, this new brand might not even be an existence...