So, I'm driving Interstate 35E from the suburbs into St. Paul. A younger guy in an older Mitsubishi Eclipse with some kind of tuned sporty muffler is weaving in and out of the lanes. When I take the off ramp to Shepherd Road, not far from my house, I see the car on its side with the driver standing beside it on his phone. I pulled over and asked if he was okay. He says while he was stopped in the turn lane for the red light to change, two guys jumped out of a club cab and flipped his car on its side. He was waiting for a wrecker.
How f....ing strong these guys must have been. I can't imagine. I do think it was kind of funny.

Back in high school we had a math teacher, Ms. Wolfe. Tall, like 5'11", and beautiful. She drove an Austin Healy Sprite, called a "bugeye". Really small car. Our high school in FL had open outside hallways with support columns about every 12'. Our favorite joke on Fri. evenings after the football game was to pick up her car and put it between 2 columns. She would come looking for us with her giant German Shepherd named Dammit and threaten to fail everyone of us if we didn't put it back. We always did. Was funny to see this near 6' woman and her 100+ lb. dog riding off in a car the size of a VW.

That "bug-eyed" Sprite is worth a small fortune if you can find one!!! FTRPLT

While working on the Oakland/Alameda estuary, I watched a little Mazda truck pull up behind a car. Car waiting at a stop sign, waiting to turn right. The car at the stop sign wasn't in a hurry to jump in-between cars in passing traffic. You know, waiting for a large opening. The guy in the Mazda truck, impatiently waiting behind that car, leaned over, opened the glove box, grabbed a hand gun, pointed it out the window with their left hand, and shot at (I think) the driver's side rear view mirror. He didn't hit the car, but it was definitely pointed in that direction. I'm from a small town in the Midwest. I've never seen anyone shoot a gun at someone like that, let alone over something as petty as something like this. Blew my mind. I don't know what happened after that. I went back inside where I was working because I thought I could be next.

Zeno Marx said:
The guy in the Mazda truck, impatiently waiting behind that car, leaned over, opened the glove box, grabbed a hand gun, pointed it out the window with their left hand, and shot at (I think) the driver's side rear view mirror.
Click to expand...

My older daughter, now 42, is a chronic tailgater. I have told her, time and time again, that she's going to cause trouble for herself, either by accident or a road rager. I would have thought she would have learned.

When she was about 20, she admitted that she "may have been following behind a pick-up truck" too closely. The truck's driver pulled over to the side of the road, then drove behind my daughter, then apparently moved over into the left lane, and moved at an angle to catch my daughter's left rear bumper with his front bumper and push her into a spin that forced her to hit a utility pole. He then drove away horn blaring. My daughter, fortunately, was not injured but the car was totalled.

Ranger107 said:
Our favorite joke on Fri. evenings after the football game was to pick up her car and put it between 2 columns.
Click to expand...

I had a female family member who had an Isetta: 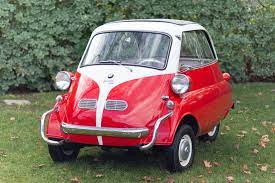 She lived in a house on a hill. Periodically, she'd wake up to find her Isetta on the front lawn.

One of my friend's father worked for the National Auto Show. Besides his lemon yellow Cadillac, he drove a 3-wheel Messerschmitt. 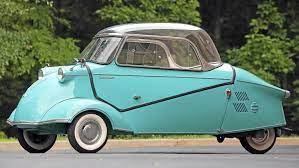 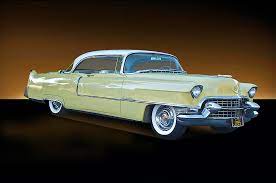